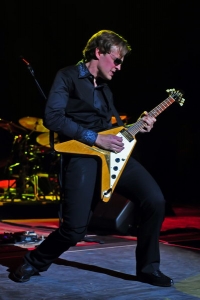 As Joe Bonamassa grows his reputation as one of the world’s greatest guitar players, he is also evolving into a
charismatic blues‐rock star and singer‐songwriter of stylistic depth and emotional resonance. His ability to
connect with live concert audiences is transformational, and his new album, The Ballad Of John Henry, brings
that energy to his recorded music more powerfully than ever before. The ninth solo album and seventh studio
release of his career – as well as his fourth consecutive with producer Kevin Shirley (Led Zeppelin, Black
Crowes, etc.) – the disc adds a heavy dose of “swamp” to Bonamassa’s virtuoso mix of ‘60s‐era British bluesrock
(à la Beck and Clapton) and roots‐influenced Delta sounds. It shows off Bonamassa’s vocal range as much
as his instrumental voodoo, and the artist says, “I feel this is my strongest work to date.”
The album’s title track honors the mythic American figure that Bonamassa calls, “the ultimate working class
hero.” He was inspired to write “The Ballad Of John Henry” – a song that drives as hard as its legendary
namesake did pounding railroad spikes into the ground – while crossing the U.S. on a tour bus and observing
the country changing in unsettling ways. “It used to be,” says Bonamassa, “there was dignity to being a middleclass
worker, making an honest living. It was a certain mentality that was uniquely American. Now kids say, ‘I
want to be rich, and I don’t care how I get there.’ To me, my mom and my dad are my heroes, working their
whole life at meaningful jobs that add to society. We need more of those heroes these days. That’s what this
song means to me.” Kevin Shirley adds, “I feel like Joe accessed the magic of the old blues guys and the spirit
of the freed slaves. It’s an amazing track, and it’s awesome that he used this legend.”
Like that of John Henry, Bonamassa’s story has its fair share of legend, grit and endurance. Remarkably, the
2009 release of The Ballad Of John Henry coincides with his twentieth year as a professional musician, an
extraordinary timeline for a young artist just into his ’30s. A child prodigy, Bonamassa was finessing Stevie Ray
Vaughan licks when he was seven and by the time he was ten, had caught B.B. King’s ear. After first hearing
him play, King said, “This kid's potential is unbelievable. He hasn't even begun to scratch the surface. He's one
of a kind.” By age 12, Bonamassa was opening shows for the blues icon (something he also did recently as the
opener on King’s 80th birthday tour), and went on to tour with venerable acts including Buddy Guy, Foreigner,
Robert Cray, Stephen Stills, Joe Cocker and Gregg Allman.

Bonamassa circles the globe playing an average of 200 shows a year, and his mind‐blowing guitar wizardry and
electriifying stage presence are selling out progressively larger venues all the time. In 2009, he’ll make his
headlining debut at Royal Albert Hall in the U.K., where audiences have been especially appreciative of his
gifts. British publication Guitarist has written, “For all‐out invention, frenetic fret‐tickling & truly enormous
tone, look no further than Bonamassa,” and journalist Pete Feenstra wrote of a BBC Live performance, that,
“he is both as eloquent and learned about the music he plays as he is technically brilliant.” Sam Leach, one of
the Beatles earliest promoters in the U.K., compared the first time he saw him to his initial glimpse of the Fab
Four– “I got that same feeling of excitement…Joe is the premiere Blues/Rock artist on the planet.”
Ongoing journeyman touring is a given, and looking beyond The Ballad Of John Henry, Bonamassa will
continue his recording collaboration with producer Kevin Shirley, who says, “It’s great working with Joe and
seeing him enjoy the discovery of all these places he can go. He’s an artist who can play anything, there are so
many facets to him.” Bonamassa adds, “Kevin comes up with fantastic ideas outside the box. He appreciates
the blues, but pushes me, the only person besides Tom Dowd who’s done that.”
58
What's This
Advertisement