Jimmy Johnson - Every Day Of Your Life 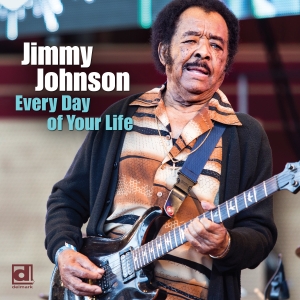 
FOUR DECADES AGO, JIMMY JOHNSON PERMANENTLY ESTABLISHED HIMSELF as a front-rank Chicago bluesman with his unusually imaginative Delmark debut album Johnson’s Whacks. Now he’s come full circle: Jimmy’s back on Delmark with this exciting release, which shows that he remains a vital blues force into his 90s. Johnson’s fluid, slicing guitar licks dart and spark with unpredictable elasticity throughout this set. His voice soars to the heavens time and again, never misplacing its melismatic passion no matter the tempo.

From the funky opening original “Every Day Of Your Life,” constructed around a wise lyrical message, to a churning “Down In The Valley” and exquisitely tailored revivals of the lights-out slow blues “Strange Things Happening” and a hard-driving “I Need You So Bad,” Jimmy is never less than masterful. Few contemporary bluesmen are so devastating when working in a minor key—witness Johnson’s personalized treatment of Fenton Robinson’s classic “Somebody Loan Me A Dime.” “My Ring,” another standout original, takes a swaying and unexpected reggae turn (pushing the stylistic envelope has long been one of Jimmy’s trademarks), and Johnson sits down behind the 88s for a solo reprise of Bobby “Blue” Bland’s uplifting “Lead Me On” to close the album in deeply moving style.

Funny thing is, Jimmy only became a full-time blues guitarist in the mid -1970s. Prior to that, he mostly traversed the R&B side of the tracks. Born in Holly Springs, Mississippi, Johnson grew up along with another future blues luminary, Matt Murphy. “I picked up a guitar because Murphy had a guitar,” he says. Sacred and secular sounds competed for his attention. “My first time of singing in front of an audience, I was singing gospel,” notes Jimmy. “My uncle had a Victrola, the ones you wind up, and I got to hear John Lee Hooker, Arthur “Big Boy” Crudup, Sonny Boy Williamson.” Johnson migrated north during the late 1940s, stopping for a time in Memphis and forming a gospel group called the United Five before heading to the Windy City in 1950. Why Chicago? “Probably two reasons,” Jimmy says. “Economics and to get away from that Jim Crow!” His younger brothers Syl and Mac soon followed, both making their mark on the Chicago blues scene prior to Jimmy—Mac as Magic Sam’s electric bassist and Syl as a hotshot young guitarist prior to striking out on his own and making hits. Federal Records changed Syl’s surname from Thompson to Johnson when he cut his first single for the firm in 1959, and eventually Jimmy would follow suit.

With Magic Sam, Otis Rush, and Freddie King among his primary inspirations, Jimmy apprenticed as a sideman with various blues combos after getting his feet wet locally singing gospel and doowop. He fronted his own band, the Lucky Hearts, recording with them in 1968. That same year, he waxed an instrumental version of Syl’s smash “Sock It To Me” under the name of the Deacons that dented the national R&B charts. Playing behind soul stars Otis Clay, Ruby Andrews, Denise LaSalle, and Walter Jackson in top South Side clubs paid the rent until the gigs dried up in 1974. “That’s when that field I was in had died,” says Jimmy.

So the resourceful Johnson hired on with Delmark star Jimmy Dawkins for a couple of years as his rhythm guitarist. He also found time to tour Japan in 1975 as Otis Rush’s second axeman (a jaunt immortalized on Otis’ Delmark album So Many Roads—Live in Concert ). Then it was Jimmy’s turn to step out front. Between Johnson’s Whacks and his four songs on Alligator’s Living Chicago Blues series, Jimmy took his place among Chicago’s elite blues guitarists at the end of the ‘70s. He encored on Delmark in 1982 with the adventurous album North/South, and Alligator picked up his Barroom Preacher from a French label in ‘85. He’s been a Chicago blues mainstay ever since.

Performing regularly on the local circuit at a pace that would tire a musician half his age, Jimmy Johnson insists on proudly upholding the classic Chicago blues tradition. “It’s always fun to me to play onstage,” says Johnson. “I really enjoy being onstage entertaining people.” Without a doubt, his fans reciprocate that love.— BILL DAHL, journalist from liners