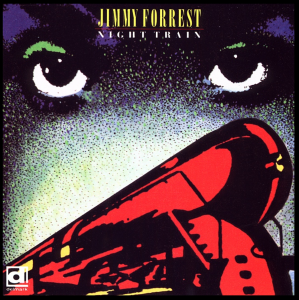 In St. Louis, Jimmy Forrest was very, very big and had just about all the best jobs in town sewn up. But it was a time of intellectualization in jazz, a time of retreat from hard-swinging into what seemed and almost lifeless kind of jazz known as the “cool school”.

Forrest wasn’t a cool musician: he was too strong, had too much technique, and he had but one choice, to get buried in the scuffle or go into rhythm and blues. As these recordings testify, he chose the latter and became eminently successful for quite a few years.

Part of our United Series.

Jimmy Forrest had a tremendous hit in 1951 with "Night Train," a simple blues riff he lifted from Duke Ellington's "Happy Go Lucky Local." Although the tenorman was not able to duplicate that song's appeal with any other recording, he was a popular performer in the R&B circuit throughout the 1950s. Virtually all of his records from the era (originally made for the United label) are on this CD reissue, including five selections not previously released. The tough-toned Forrest was not really a screamer or a honker, and the 17 numbers on the set should be of interest both to early R&B and jazz collectors. Recorded in Chicago, Forrest fronts a rhythm section that includes either Charles Fox or Bunky Parker on piano and sometimes trumpeter Chauncey Locke or trombonist Bert Dabney. The music is very enjoyable and highly recommended.

Jimmy Forrest was born in Saint Louis on January 24, 1920. In high school he was already performing in the local bands of Eddie Johnson (the same bandleader Tab Smith had once worked for), Fate Marable, and Jeter-Pillars. He first made his mark in the jazz world in Don Albert's big band during 1938-39. Later he would play with Jay McShann (1942), Andy Kirk (1942-48), and Duke Ellington (1949-50). (For extensive coverage of Forrest's recordings, see the solography at http://www.jazzarcheology.com/?p=376. "Night Train" is, in fact, lifted right out of a 1946 composition by the Duke titled "Happy Go Lucky Local." In 1951 Leonard Allen and Lew Simpkins found Forrest honking the "Night Train" riff in a Saint Louis club and the rest is history. Forrest had given it a dirty name, so (as often happened in those days) United reconfigured the title to something more radio-friendly. For his first session with the label, Forrest appears to have used his regular St. Louis combo: Bunky Parker, piano; Johnny Mixon, bass; Oscar Oldham, drums; Percy James, congas and bongos. Some of the items from this session (such as "Swingin' and Rockin'") show substantial bebop influence.