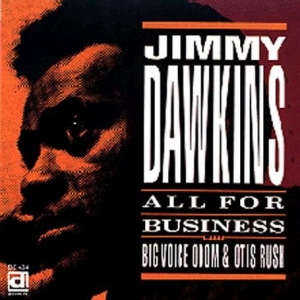 all songs by Jimmy Dawkins except noted

On November 27, 1971, in Orange, France, Jimmy Dawkins was presented with the Grand Prix du Disque de Jazz by the Hot Club of France. His first LP, "Fast Fingers" (Delmark DS-623) had been selected by the prestigious French organization as the best record of 1971 - thus becoming the first blues disc to be so honored in nine years, and only the third in the 42-year history of the award. (The last blues LP to win the Grand Prix was Big Joe Williams' "Blues on Highway 49" Delmark #604.)

For Jimmy, this was the crowning point of a hitherto rather unheralded career. "The award, I think it came out of respect," says Jimmy, a thoughtful, straightforward, soft-spoken man." And because I reflect a different type of music. Like it's in the style of my own but it still is in the modern style."

Blues is his life, and he refuses to change that. But he's not afraid to change and to experiment musically within the blues framework. Some blues artists have made names for themselves by clinging to the same musical formulae year after year; but Jimmy is continually creating, innovating, progressing, yet remaining true to that West Side blues guitar sound which is distinctively his. This LP is different from his first on Delmark. His next will no doubt display him in yet another new blues setting. And so on.

"I feel that my music is something to be appreciated in years, or in the future more than now," says Jimmy. But try it now. It's good, and good blues are timeless.

Backing Jimmy on this record are some excellent sidemen. On second guitar is Otis Rush, a musician highly respected by Jimmy and highly acclaimed by blues critics the world over. Otis has recorded for Cobra, Chess, Duke, Vanguard, Cotillion and Capitol, and his early works are regarded as classics of modern blues. Bassist Ernest Gatewood has long provided the solid foundation for the Rush band, and the powerful, energetic saxophonist Jim Conley is perhaps the best horn man Otis has ever featured in his group. Sonny Thompson has been an important figure in the blues for years, as a pianist, composer, arranger and producer, especially for King/Federal Records. Sonny recorded many singles himself for Miracle, Chart, King and other labels, and has provided accompaniment and supervision on countless blues and R&B sessions. Sharing the vocal spotlight with Jimmy is the aptly named Andrew "Big Voice" Odom, who frequently works with Jimmy in the West Side clubs. "Voice" has recorded for Nation and ABC BluesWay, and was the featured vocalist on some of the late Earl Hooker's albums.