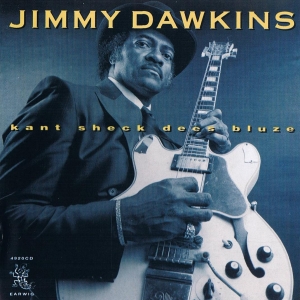 Chicago guitarist Jimmy Dawkins would just as soon leave his longtime nickname “Fast Fingers” behind. It was always something of a stylistic misnomer anyway; Dawkins’s West Side-styled guitar slashes and surges, but seldom burns with incendiary speed. Dawkins’s blues are generally of the brooding, introspective variety — he doesn’t engage in flashy pyrotechnics or outrageous showmanship.

It took a long time for Dawkins to progress from West Side fixture to nationally known recording artist. He rode a Greyhound bus out of Mississippi in 1955, dressed warm to ward off the Windy City’s infamous chill factor. Only trouble was, he arrived on a sweltering July day! Harpist Billy Boy Arnold offered the newcomer encouragement, and he eventually carved out a niche on the competitive West Side scene (his peers included Magic Sam and Luther Allison).