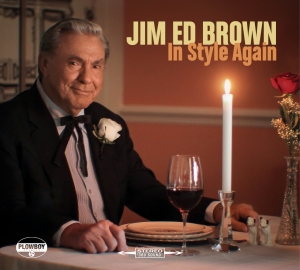 "In Style Again" features duets with Vince Gill, The Whites, and reunites The Browns.

Additional Vocals:
Bonnie Brown - "When The Sun Says Hello To The Mountains"
Vince Gil - "Tried & True"
Helen Cornelius - "Dont' Let Me Cross Over"
Sharon & Cheryl White - "You Again"
Bergen White, Lisa Silver & Kira Smal McConaghy - "Watching The World By", "I Love It', "It's A Good Life", "Luck Enough", "Laura (Do You Love Me)"

Nashville, TN (September 18, 2014) – Country Music fans have a good reason to look forward to 2015. Longtime fan favorite Jim Ed Brown will be returning with his first solo recording in three decades with the January release of IN STYLE AGAIN, his debut project for Plowboy Records. “I love new music.” said Brown about his new disc. “I guess the whole world does. It’s always good to hear a new song. I love what I do. People have always been great to me. They have accepted me into their homes and lives. It’s unreal what radio and television has done for me. I am a very blessed man.”

One of the most timeless voices in Country history, Brown has the distinction of having hits on the chart as a member of a trio (His recording partnership with sisters Maxine and Bonnie as The Browns earned them hits with “I Heard The Bluebirds Sing,” “Scarlet Ribbons,” and the 1959 million-selling “The Three Bells”), a solo artist (with hits like the iconic “Pop A Top,” “Southern Loving,” and “Morning”), and as part of a CMA Award winning partnership with Helen Cornelius (The two recorded many classics from 1976-1981, including “I Don’t Want To Have To Marry You,” and “Lying In Love With You” - which was one of the first major hits penned by Nashville Songwriters Hall of Fame member Dean Dillon.)

IN STYLE AGAIN neatly brings together all phases of Brown’s historic career. “When The Sun Says Hello To The Mountain” features the distinctive harmonies of his sisters. Brown says reuniting with his sisters is a dream come true. “I’ve had a song in mind for all those years. In fact, I had a copy of it that I picked up when I was in Europe that I have kept for so many years. I thought ‘Why don’t I see if I can’t get them to record one more time with me?”

The album also features 12 solo performances from the singer. But, when an artist as important as Jim Ed Brown steps into the recording studio, other artists naturally want to follow. He is joined on “Tried and True” and “You Again” by fellow Grand Ole Opry members Vince Gill and The Whites, respectively. He also reunites with Cornelius on the Carl and Pearl Butler chestnut “Don’t Let Me Cross Over.”

All but one of the cuts on IN STYLE AGAIN were produced by veteran journalist Don Cusic, while the title cut was produced by longtime Brown friend Bobby Bare. “Last year, we were talking, and I said ‘Bobby, I want you to produce a record for me.’ He had been doing some things with his son and some other people. He said ‘Give me a call,’ so I found this song, and I called him. He did a great job on it.”

IN STYLE AGAIN teams Brown up with Shannon Pollard and Plowboy Records. The partnership makes musical sense as the label takes its name from Pollard’s grandfather, “The Tennessee Plowboy,” Eddy Arnold. Brown’s warm and tender style has often been compared to that of Arnold, whom he has shared many a stage with.

Brown is also familiar to audiences through his extensive work in television, with his Country Place syndicated series in the early 1970s, Nashville On The Road from 1975-1981, and You Can Be A Star and Going My Way from the 1980s. Brown was also the commercial spokesperson for Dollar General Stores for well over a decade. Since 1963, Brown has been a member of the Grand Ole Opry. His weekly radio show, Country Music Greats Radio Show, was heard on over 200 radio stations per week.