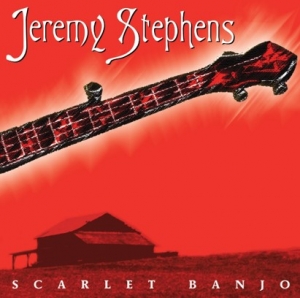 Scarlet Banjo is Jeremy Stephens debut release on the Rebel label. It was recorded when he was just sixteen years old in 2001. He is backed by a talented group. Troy Brammer, who recorded some classic sides with Wade Mainer in the early 1950s, plays guitar on twelve of the fourteen tracks along with writing "Double Banjo Roll" and "The Scarlet Banjo". Kirk Sutphin swaps leads with Jeremy on two guitar duets. Ronnie Stewart who has been an IBMA "Fiddle Player of the Year" and a veteran of the Lynn Morris Band along with Andy Martin, who is steeped in old-time and bluegrass, provide the fiddle backing. Darren Moore, a dedicated disciple of the Carter Family, rounds out the sound on the bass.

Jeremy Stephens is a native of southside Virginia, where he was exposed to the rich musical culture and history of the region. This exposure formed a love and passion for the bluegrass, old-time, and related music which he heard. He took up his first instrument and true love, the banjo, as a five year old boy. An accomplished multi-instrumentalist, Jeremy excels on banjo and guitar. His banjo influences include Grandpa Jones, Don Reno, Ralph Stanley, Troy Brammer, Charlie Poole and Tommy Jarrell. Of late, he is a founding member of "High Fidelity" and has just released a solo project, "How I Hear It". The Washington Post noted about Jeremy and the album upon its release: "He may be the new kid on the block, but on "Scarlet Banjo" he often sounds like an old soul with still nimble hands."
Anyone in the company of Jeremy Stephens will be impressed by his boundless enthusiasm for bluegrass and old-time music. He has a deep, abiding respect for the music he loves and the musicians who produced it. They would be pleased to know that someone as talented as Jeremy is continuing the tradition they helped to create.
2
What's This
Advertisement