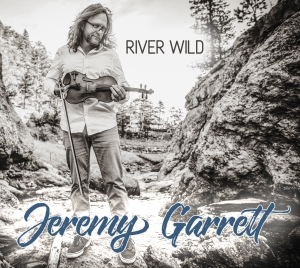 Why You Should Care: Jeremy Garrett, from the GRAMMY-winning Infamous Stringdusters, returns to his bluegrass roots that first brought him accolades and critical attention

At heart, Jeremy Garrett is a bluegrass fiddler. Even with his explorations of the genre’s edges as a member of The Infamous Stringdusters — not to mention the boundary-breaking, technology-enhanced solo recordings and performances on his first two projects for Organic Records, Circles (2020) and Wanderer’s Compass (2021) — Garrett has always kept his bluegrass tools sharpened and at the ready. Now, his irrepressible creativity and a keen sense of the moment have led him to dig deep into ten years’ worth of his catalog of original songs — and one of the most enviable address books in the business — to produce River Wild, a visit to the musical ground on which his career was born.

To be sure, this is no ordinary bluegrass album. As the lyric that emerges from the moody, almost ominous opening to the title track (written with bluegrass powerhouse Rick Lang) announces, in the voice of the river, “I got my own mind, I got my own will,” and from that opening number to the virtuosic solo fiddle closer, “Burning The Slash,” Garrett’s powerfully distinctive approach to the genre is on full display. That’s true even when the tune is a pedal-to-the-medal, full-on bluegrass romp like the second track and first single, “What’s That You’re Doin’?” “A fast paced, playful and traditional sounding bluegrass song,” Garrett calls it, “a fun conversation between two lovers heading towards the goal of ‘getting hitched,’ to use an old time term, and asking what it will take to get the job done. This song was co-written with my friend, Benny (Burle) Galloway, and I love how it stays on the ‘1’ chord for the entire verse — for all of those,” he adds with a laugh, “who may be following along with the Nashville numbering system!”

From there, the set winds through sinuous contemporary instrumentals, original bluegrass songs both mainline and edgy, a signature bit of acoustic pop and even an unexpected — and bravura — tip of Garrett’s hat to the Father of Bluegrass himself. Among the highlights, annotated by the artist:

“Potato Farmer”: “It has been quite some time since I’ve been able to write some instrumental music for a project like this, involving guest musicians. There are several instrumental numbers on this record, but I highlighted this track as one to show off the stellar pickers who joined me: Seth Taylor, an incredible guitar player who I think will be a household name in the guitar world soon, along with the rock solid Barry Bales on bass, Alan Bibey on mandolin and the incredible Ryan Cavanaugh on banjo.”

“In the Blink of an Eye”: “I co-wrote this with Jon Weisberger, and it’s one of my favorite songs that I have helped pen. I love how the melody cries out from the very beginning, and the mix that Scott Barnett put on it sonically is transcending. I think it’s one of those special songs that many people can vibe with. The musicians all played incredibly on all of the tracks for this record, but this one is a stand-out to me. Big fiddle jam at the end as well!”

“In a Song”: “This was the result of a first time co-writing attempt with Josh Shilling, who would become a great friend. We have written many songs together now, and this one hits home for me. It tells a story of an old man who leaves his guitar to a young, up and coming musician. He has one request — to be remembered in a song. As a musician, performer, singer and songwriter, who has virtually committed my life to music, to be remembered in a song that lives on after I leave this world would indeed be a special way to be remembered.”

“Kentucky Waltz”: “This song, of course, is a bluegrass classic, by Bill Monroe. I heard my dad sing this from an early age and have always loved it; it’s a fun one to slow way down and play around with, with some fiddle double stops and going large on the vocals. The rest of the songs on the record are original, but I wanted to pick one classic, and this one stood out to me. I hope you enjoy my rendition.”

“I had it in my heart to do a bluegrass record this time around,” he concludes, “and to call upon some friends to help me record it. I picked some of my favorite songs from my original catalog, and also wrote some specifically for this project. I went as bluegrass as I could, while trying to be true to being original. I poured my life’s blood into these songs and the performance of them, and I was so honored to have this lineup of players and singers to make the songs be all they could be — and then some. This one goes out special to all the fans who have been so supportive of my music endeavors through the years!”

With help from that insightfully chosen group of pickers and singers — Seth Taylor (guitar) and two-time IBMA Mandolin Player of the Year Alan Bibey are the constants — that includes banjoists Ryan Cavanaugh (Bill Evans Soulgrass), Gena Britt (Sister Sadie) and Russ Carson (Ricky Skaggs & Kentucky Thunder), bassists Travis Book (Infamous Stringdusters) and Barry Bales (Alison Krauss & Union Station), dobroist Andy Hall of the Stringdusters, as well as bluegrass legend Lou Reid and Mountain Heart’s masterful Josh Shilling on harmony vocals, Jeremy Garrett has delivered a remarkable musical statement. At once a love letter to bluegrass, and a bold assertion of his continued place in it, River Wild is the album that his fans and colleagues alike have been waiting for.
25
What's This
Advertisement