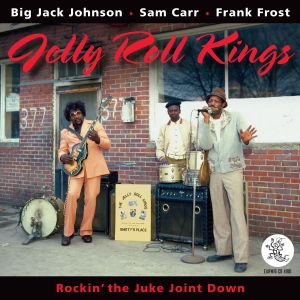 Circa 1962, Big Jack Johnson (guitar and bass), joined Frank Frost (harp and Farfisa organ) and Sam Carr (drums) initially as Frank Frost and the Nighthawks which would eventually be renamed The Jelly Roll Kings (Frost and Carr have roots that reached back even further into blues lore: Frost a student of both Sonny Boy Williamson and Willie Foster's harp playing and Carr learned at the feet of his father, the legendary Robert Nighthawk, the name presumably that lent itself to their trio initially. Together, they would often back both Sonny Boy and Nighthawk in the 1950's and 1960's).

The combination of the young hot shot with the older veteran bluesmen was undeniable. In April 1962, Jack made his fist recordings backing Frost in Memphis TN for Sam Phillip's Phillips International label during three separate sessions that were released under Frank Frost and the Nighthawks. These included the song "Hey Boss Man" and can be heard on the excellent Charly Blues release, "Frank Frost-Jelly Roll King".

For the remainder of the 1960's and throughout much of the 1970's, the Jelly Roll Kings played their brand of rugged and ragged good-time Mississippi blues in the ramshackle juke joints across the Delta region and won a slow, but, hard earned reputation as THE quintessential Mississippi blues band.

The trio's first lp, recorded in 1979 for Earwig and titled "Rockin' The Juke Joint Down", was the revelation of raw and ruckus real deal blues that the blues world was starving for and a lifeline for blues aficionados during what was essentially a very low commercial point for blues music overall. "Rockin' The Juke Joint Down" received a nomination for a Handy Award for "Best Traditional Blues Album" in 1980 and also marked the first time Jack would sing on record as well. Festival appearances in Chicago and the Poconos as well as a couple of successful tours of the Netherlands brought greater acclaim for the Jelly Roll Kings.
31
What's This
Advertisement