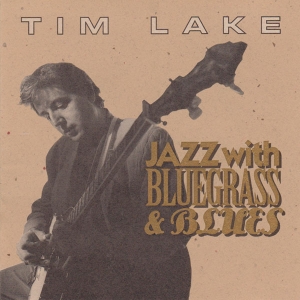 Recorded with his trio, The Little Big Band, these performances successfully blend the singer-songwriter and banjo player attributes of Tim Lake and his music. Hailed as one of “the great banjoists of any style” (Dirty Linen — Feb/Mar 1995) and an “especially good lyricist conveying social justice and ecological concerns” (Louisville Music News — April 1996), this recording will appeal both to listeners interested in instrumental virtuosity and fine songwriting. This is his only recording that features standard bluegrass band instrumentation throughout (banjo, guitar, mandolin, fiddle, and bass). Each song flows smoothly to the next while retaining a wide range of stylistic influences and a unique and eclectic banjo style. Thirteen of Lake's best songs to date are featured.

All songs, words and music written by Tim Lake and published by Padraig Publishing, ASCAP, 1995. All Rights Reserved.

“Behold a new leading man of popular balladry: Tim Lake, reared in Kentucky and now likely to become a national phenomenon through the release of ‘Same Old Roadside Inn’ (Rounder). Instantly authoritative, Lake has a bold, resonant, flexible voice. He also wrote all the songs, and they range through lives as different as those of a destroyed guitar picker and a most content long- time lover.”
–Nat Hentoff, Cosmopolitan Magazine – December 1979

Jazz With Bluegrass And Blues, An American Concerto For 5-String Banjo And Orchestra, & Only In The Movies – “Lake continues to challenge the preconceived notions and expectations people fall back on that limit their openness to new and different sounds. In Lake’s musical world, there are no limits and no boundaries.”
–John Lupton, Music Hound – Folk, The Essential Album Guide, 1998

Jazz With Bluegrass And Blues, An American Concerto For 5-String Banjo And Orchestra, & Only In The Movies – “From his early Rounder album through these three releases on his own Padraig label, Lake has continually demonstrated a remarkable breadth of imagination and inventiveness as an instrumentalist, singer, songwriter, composer, and humorist.”
–John Lupton, Sing Out!, Winter 1998

Jazz With Bluegrass And Blues – “Reflects the mind of an artist who is at once a sensitive and compassionate social observer, as well as a joyful and talented musical spirit breaking new ground for a traditional instrument.”
–Eric Souders, Crossroads, March/April 1997

Jazz With Bluegrass And Blues – “He has combined his experience in bluegrass music with classical, jazz, blues, ragtime and folk to create a style he can certainly call his own. He has both technique and fresh ideas. Tim Lake’s recordings give us a glimpse into the mind of one of today’s leading progressive proponents.”
–Ian Perry, Banjo Newsletter, April 1997

“Jazz With Bluegrass And Blues is the perfect introduction to modern folk music to the uninitiated. Fans of Alison Krauss will love this album.”
–Brian Privett, Kentucky Kernel – December 4, 1995

“Jazz With Bluegrass And Blues, and the 13 original tunes show off Lake’s musicianship as well as his talent as a songwriter.”
–Jeff Worley, Ace Magazine – October 1995