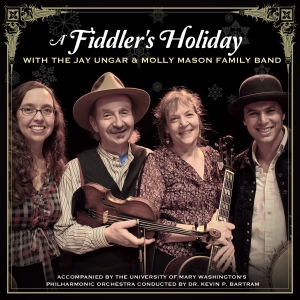 What is it they say about the family that plays together?

Well, even if they don't all live under the same roof, this family makes terrific music and has a rip-roarin' good time while they're at it. The Jay Ungar & Molly Mason Family Band features Jay, Molly, Jay's daughter Ruthy Ungar, and her husband Mike Merenda. They travel with Ruthy and Mike's son Will, born in 2008 and daughter Opal, born in 2012, both of whom occasionally wind up part of the act.

With exceptional musicianship and a vast knowledge of a number of music styles, Jay Ungar & Molly Mason are one of the most celebrated duos in American acoustic music. They achieved international acclaim in 1990 when their performance of Jay's composition “Ashokan Farewell” became the musical hallmark of Ken Burns’ “The Civil War” on PBS. The soundtrack won a Grammy and “Ashokan Farewell” was nominated for an Emmy.

Mike & Ruthy are accomplished singers, songwriters and instrumentalists in their own right. Ruthy cut her teeth on traditional music and grew up to be a top-flight performer. Mike favored rock and ska before being drawn into the world of acoustic music.

Four terrific musicians. Put them together and the sum really is greater than its parts. Double fiddles, sweet vocal harmonies and rhythmic energy abound as two generations collaborate to entertain you with music from the heart and soul of America.

Dr. Kevin P. Bartram has been director of the University of Mary Washington Philharmonic orchestra since 2002. He was previously assistant professor and orchestra director at Gettysburg College, in Pennsylvania, and orchestra director at the high school level in Maryland. Dr. Bartram received his doctor of musical arts in music education from Shenandoah Conservatory of Music in Winchester, Virginia, and he has degrees from the University of Missouri-Columbia in orchestral conducting and Northwestern University in music education. With more than 25 years of experience at the college and public school levels, Dr. Bartram has a track record of producing extraordinary orchestras. Bartram is in demand across the country as a guest conductor, adjudicator, and speaker. He also judges national music competitions throughout the country each year. Bartram founded and directed the Maryland Wind Symphony, and was assistant conductor of the Missouri Symphony. Dr. Bartram is national Development and Membership Chair for the College Orchestra Directors Association, and is past-Chairman of the Fredericksburg Arts Commission. Bartram serves on the Economic Development Authority’s Advisory Council, and co-founded Via Colori, Fredericksburg’s premiere arts festival. He has also served on the Strategic Planning Commission for the Spotsylvania County Public Schools, and was for many years the Research Chair for the Virginia Music Educators Association. He and his wife Connie have two sons, Nicholas, age seven, and William, agesix.