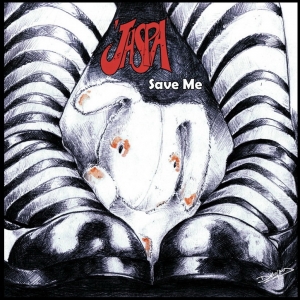 JASPA are a 4 piece pop/rock band. Working together since 1998 and influenced by great music, past and present, they have developed a sound that is distinctly their own and have, over the years, gathered a large fan base. On stage they present a show of tireless energy where each personality shines and can be savoured without restraint. Jaspa’s breathtaking vocals and spot on lyrics, she is English by the way, together with Didier, Franks and Philippe’s powerful music, create a unique colour, blending pop and modern rock, making their music fresh and irresistible.

" SAVE ME " . . . the title which opens the album of the same name - is a stunning blues number. . stunning rhythmically but especially so in the depth of voice of the singer, JASPA. A Tina Turner voice - warm and powerful which interweaves perfectly with the electric guitar of Philippe . Contagious rock , which the more one listens to the more one wants to join in and become part of a combined experience ! A touch Gospel , on ' Better Side of You ' Jaspa plays her voice with subtle inflections ... she is a Sound - very rock with words that grab you . . but above all she is a voice . .and what a voice !  'Will I see you again' entices the ear with a languorous and sensual undercurrent . . 'Sleep my baby' darker and metallic is a melancholy ballad strained through a synthesizer.  The arrangements are subtle and melodious . . a quiet rush of wonder for the ears ! . . . and above all THIS VOICE ! . . which gives so much pleasure from each of the twelve pieces on the album. . and to finish perfectly are the songs 'Rage ' ( very hard core . . ) and " Save Me " again - but this time acoustic.
An absolutely irresistible CD . .
Justine Sirkis
16
What's This
Advertisement