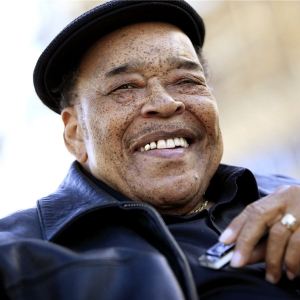 
''The blues is all about feeling,'' says Grammy Award-winning harmonica legend James ''Mr. Superharp'' Cotton. ''If I don't feel it, I can't play it.'' Now in his 69th year as a professional musician (starting at age nine), James Cotton not only feels it, he lives it. His overwhelmingly powerful harmonica is one of the iconic sounds of the blues. His skills are unrivaled, his story the stuff of legend. Born on a cotton plantation in Tunica, Mississippi on July 1, 1935, Cotton learned harmonica directly from Sonny Boy Williamson II (Rice Miller) as a small child. He toured with Williamson and Howlin' Wolf, recorded for Sun Records, and spent 12 years with Muddy Waters before stepping out on his own. Leading his own band, he earned his reputation as one of the most commanding live blues performers in the world - a man who could literally suck the reeds out of his harmonica from the pure force of his playing - one high-energy performance at a time.

His new Alligator album, Cotton Mouth Man, is a joyous celebration of his life in the blues. Recorded in Nashville and produced by Grammy-winning producer/songwriter/drummer Tom Hambridge (Buddy Guy, Joe Louis Walker, Susan Tedeschi), the album is a riveting, good-time musical journey through sounds and scenes from Cotton’s long and storied career. With seven songs co-written by Cotton (more originals than he’s ever included on one release) and Hambridge (who co-wrote five additional tracks), the stories the album tells are Cotton’s own, inspired by his colorful and sometimes perilous life. Throughout the CD Cotton’s blast-furnace harmonica sound and larger-than-life personality are front and center.

Helping Cotton tell his stories and showcase his music are guests Gregg Allman, Joe Bonamassa, Ruthie Foster, Warren Haynes, Delbert McClinton and Keb Mo. Forming the core of the backing band on the CD are Hambridge (drums), Rob McNelley (guitar), Chuck Leavell (keyboards) and Glenn Worf (bass). Tommy MacDonald and Colin Linden each add guitar to one track. Darrell Nulisch, who has been singing in Cotton’s band for many years, expertly handles the vocals on five tracks, while the other members of Cotton’s road band—Tom Holland, Noel Neal and Jerry Porter—are also on board on some of the songs. Cotton, who, after a bout with throat cancer turned the vocal duties over to others, was inspired by the sessions to return to the microphone. He brings the album to a warm-hearted close singing his own “Bonnie Blue” (the name of the plantation where he was born), helping to make Cotton Mouth Man the most personal, celebratory and just plain fun recording of his seven-decade career. According to Cotton, “I feel so happy about the music in this album. My hope is that everyone who listens feels it. I know I sure did!”

Cotton first recorded under his own name for the Chicago/The Blues/Today! series on Vanguard, and, along with Otis Spann, cut The Blues Never Die! for Prestige before forming the first James Cotton Blues Band. He made his first solo albums—three for Verve and one for Vanguard—in the late 1960s. With bands featuring outstanding musicians including famed guitarist Luther Tucker, he quickly rose to the top of the blues and rock worlds. With his gale-force sound and fearless boogie band (later featuring Matt “Guitar” Murphy), it wasn’t long before he was adopted by the burgeoning hippie audience as one of their own. Cotton shared stages with Janis Joplin, The Grateful Dead, Led Zeppelin, B.B. King, Santana, Steve Miller, Freddie King and many others.

Cotton’s blistering talent and full-throttle energy kept him in demand at concert halls all over the country. He played the Fillmore East in New York, the Fillmore West in San Francisco and every major rock and blues venue in between. During the 1970s, he cut three albums for Buddah and one for Capitol. He rejoined his old boss Muddy Waters for a series of Muddy albums produced by Johnny Winter, starting with Hard Again in 1977. Cotton also guested on recordings by Koko Taylor and many others. He was joined on his own albums by stars like Todd Rundgren, Steve Miller, Johnny Winter, Dr. John, David Sanborn, Charlie Haden, Michael Bloomfield and Cissy Houston.

Cotton signed with Alligator Records in 1984, releasing High Compression and Live From Chicago, Mr. Superharp Himself! (which earned him the first of his four Grammy nominations). In 1990 he joined fellow Chicago harp masters for the all-star release Harp Attack!. In 1991 the Smithsonian Institution added one of his harmonicas to their permanent collection. Cotton won a Grammy Award in 1996 for his Verve album, Deep In The Blues, and was inducted into the Blues Hall Of Fame in 2006. During the 2000s Cotton has continued recording and touring relentlessly, playing clubs, concert halls and festivals all over the world, electrifying audiences wherever he performs. Cotton’s 2009 return-to-Alligator release, Giant, was Grammy-nominated. USA Today said, “Since 1966 James Cotton has been carrying the Chicago sound to the world. On Giant, he pours 75 years of living into that harmonica and out comes devastating and powerful blasts of notes.”

In June 2010, Cotton was honored at New York’s Lincoln Center, where his friends Hubert Sumlin, Pinetop Perkins, Taj Mahal, Shemekia Copeland and others paid tribute to him in an all-star concert. In 2013 he toured as part of the all-star “Blues At The Crossroads II,” a tribute to Muddy Waters and Howlin’ Wolf, and he continues to perform nationally and internationally with his own high-octane James Cotton Blues Band. Nobody has more fun playing the blues, and the telepathic communication between Cotton and his band (whom he refers to as “my family”) creates inspiring, soulful music that leaves his audience on their feet, grinning and cheering for more.

Cotton Mouth Man proves James Cotton’s high-compression blues harmonica playing is still a true force of nature, while his songs and stories are a living history of the blues. As The San Francisco Examiner says, “James Cotton is an inimitable blues legend. His wailing harmonica blows them away. His improvisations on the blues are full of fun and good humor. The blues don’t get much better.”
44
What's This
Advertisement