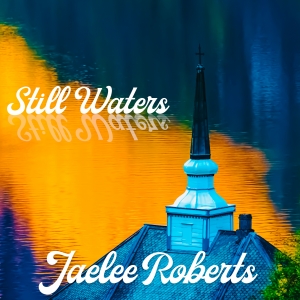 Though it’s barely two and a half minutes long, “Still Waters” has room for more than simple exposition. Beginning with the durable pairing of mandolin and guitar — from IBMA Mandolin Player of the Year Alan Bibey and veteran Tony Wray respectively — the intricate arrangement leads into the song’s chorus, delivered by Roberts and harmony singers Kelsi and Paul Harrigill (Flatt Lonesome), followed by the full band, which includes Steve Martin Banjo Prize winner Kristin Scott Benson (The Grascals) and ace fiddler Jimmy Mattingly (Garth Brooks, Dolly Parton). Roberts delivers the verses with conviction — the first by herself, the second with a crescendo of added harmonies — alternating with choruses and twin fiddle passages that recall the sound of bluegrass pioneers such as Bill Monroe and Mac Wiseman.

“When I started gathering songs to record I knew I wanted to include gospel songs, of course,” says Roberts. “Immediately I reached out to Kelsi Robertson Harrigill to see if she had written anything she could send me. Kelsi is an amazing songwriter and especially of gospel songs (‘In The Heat of the Fire,’ ‘In The Morning,’ ‘Draw Me Near,’ ‘Happy ‘Til He Comes,’ ‘Just Any Moment’ recorded by Flatt Lonesome and ‘There Is You’ by The Grascals, so I was very excited when she said she had something for me! As soon as I listened to the demo of ‘Still Waters’ I knew I had to record it; the lyrics, the melody, the tempo — it all spoke to me right away. I’ve grown up singing in church and gospel music is very special to me and the words to this are especially comforting: ‘He takes my hand and leads me beside Still Waters.’”

With the recent announcement that she has joined reigning IBMA Entertainer of the Year, Sister Sadie, as guitarist and lead singer, “Still Waters” serves not only as a convincing addition to the bluegrass canon — and, of course, as a heartfelt profession of faith — but, like “Something You Didn’t Count On,” convincing evidence that Jaelee Roberts is on her way to a place among the music’s leading interpreters.

About Jaelee Roberts
Though not quite 20 years old, Music City native Jaelee Roberts, is already more than a little familiar with—and to—the music industry. Born to veteran music professionals, she grew up backstage at the Grand Ole Opry and in the middle of rehearsals, business meetings and recording sessions, along with plenty of festivals and concerts. Roberts got her start singing in church at a very early age and began her journey as an instrumentalist at age 4 with fiddle lessons; since then, she has added guitar, mandolin and piano to her musical arsenal. Jaelee participated in and won numerous music and dance competitions, but as she began her teen years, she found herself drawn more to performance than competition. Soon, she was attracting attention for her rich voice and interpretative ability, recording not only with her father, the Grascals’ Danny Roberts, but with the Tom T. and Dixie Hall-backed Daughters of Bluegrass, and by the time she finished high school, she’d been chosen in two consecutive years as a vocal track participant in the industry-leading GRAMMY Camp. More recently, Jaelee appeared in the 2020 IBMA Songwriter Showcase and made her first singing appearance at the Grand Ole Opry as a guest with the IBMA’s Entertainers of the Year, Sister Sadie.