Jaelee Roberts - "Something You Didn't Count On" [Singl 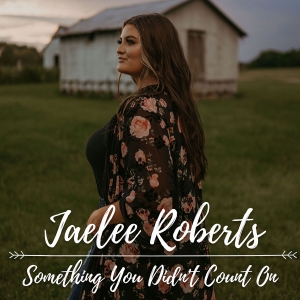 Hearing a new talent finding her voice is always an exciting musical moment, and though “Something You Didn’t Count On” might not be Jaelee Roberts’ literal debut, it marks her arrival on the scene in a way that almost demands recognition. With support from award-winning bassis/producer Tim Surrett (Balsam Range) and a group of supremely skilled and empathetic musicians, Roberts’ first single for Mountain Home Music Company more than fulfills every expectation for the young singer-songwriter.

“Jaelee’s is a name you should remember. I’ve got a feeling we’ll be hearing it a lot in the future,” says hit country singer/songwriter and 2-time IBMA Male Vocalist of the Year Shawn Camp, and he’s right. “Something You Didn’t Count On” underlines the point, offering both the song itself — co-written with another grass-inflected singer-songwriter, Theo MacMillan — and a confident performance that stands out boldly from the music supplied by an all-star crew that includes Surrett; 2-time Mandolin Player of the Year, Alan Bibey; 5-time Banjo Player of the Year, Kristin Scott Benson; guitarist Tony Wray (Blue Mafia, John Cowan Band) and fiddler Jimmy Mattingly (Dolly Parton, Garth Brooks, The Grascals).

“‘Something You Didn’t Count On’ is about anything that happens in life unexpectedly,” says Roberts. “The main theme is about love coming out of nowhere, but it really has so many underlying meanings, and that’s why I love the song so much. The melody and lyrics came to Theo and I pretty quickly and, interestingly, the storyline comes from either the male or female perspective. I think my favorite line in the song is ‘you don’t always look for what you find’ which is the focus of what the song is all about!”

Indeed, while the group turns in typically burnished backing, energetic solos and razor-sharp harmonies from Flatt Lonesome’s Paul and Kelsi Harrigill, Roberts is in full command as she delivers the song’s well-crafted story of an unexpected love capable of sweeping past every doubt and obstacle. And though it’s more providential than deliberate, “Something You Didn’t Count On” may serve, too, as a metaphor for the jump start the single should give to her career.

Perhaps Grammy and IBMA award-winner Rhonda Vincent puts it best, when she notes that “Jaelee Roberts is a perfect example of amazing talent, formed from a musical family
foundation, nurtured into a beautiful rising star. I love it when the next generation continues a family tradition!”