Jaelee Roberts - You Can't Stop Me From Staying 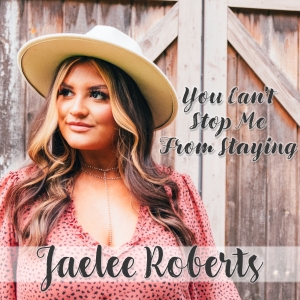 Why You Should Care: Though just 20 years old, Music City native Jaelee Roberts, is already more than a little familiar with — and to — the music industry. Born to veteran music professionals, she grew up backstage at the Grand Ole Opry and in the middle of rehearsals, business meetings and recording sessions, along with plenty of festivals and concerts. She got her start singing in church at an early age, which eventually led to winning music and dance competitions and attracting attention for her rich voice and interpretative ability. She’s recorded with her father, The Grascals’ Danny Roberts and with the Tom T. and Dixie Hall-backed Daughters of Bluegrass; and been a vocal track participant in the industry-leading GRAMMY Camp. More recently, Jaelee appeared in the 2020 IBMA Songwriter Showcase and made her first singing appearance at the Grand Ole Opry as a guest with the IBMA’s Entertainers of the Year, Sister Sadie. The video for her last single, “Think Again,” was featured by CMT.

The track, which features an all-star team of players assembled by producer Tim Surrett (Balsam Range), bursts from the gate with strong banjo picking by oft-awarded labelmate Kristin Scott Benson soaring over a strong rhythmic bed from Surrett (bass) and guitarist Tony Wray before Roberts begins to reveal the narrative of a lover whose tenacity is embodied in the twist of the song’s title. Punctuated by energetic solos from award-winning mandolinist Alan Bibey and fiddler Jimmy Mattingly, Roberts’ fresh, expressive voice delivers each verse in tones of mounting confidence, with each chorus framed by harmonies from bluegrass power couple Kenny & Amanda Smith as the trio evokes the pledge that lies at the center of the song.

The attractiveness of its unbridled optimism came as something of a surprise to the singer, who notes:

“It’s no surprise to anyone who knows me that I always gravitate toward sad songs. However, when I heard ‘You Can’t Stop Me From Staying,’ it made me smile and I immediately fell in love with the song! The lyrics are about not giving up on someone even if they are trying to push you away because they don’t feel like they’re deserving of you to stay with them:

You can’t stop me from staying
These hard times ain’t gonna get me down
Nothin’ in this world is gonna break me
You can count on my heart to stick around.

That is just a good story and I’m sure thankful to have the opportunity to share something that is encouraging – to not give up on a relationship if you believe in it.

The message of the song is positive and the music is up-beat and up-tempo…all of which can be difficult for me to feel drawn to…but this great song written by Molly Tuttle and Jon Weisberger snagged me and I hope it will you, too!”

Listen to “You Can’t Stop Me From Staying” HERE.

About Jaelee Roberts
Though just 20 years old, Music City native Jaelee Roberts, is already more than a little familiar with — and to — the music industry. Born to veteran music professionals, she grew up backstage at the Grand Ole Opry and in the middle of rehearsals, business meetings and recording sessions, along with plenty of festivals and concerts. Roberts got her start singing in church at a very early age and began her journey as an instrumentalist at age 4 with fiddle lessons; since then, she has added guitar, mandolin and piano to her musical arsenal. Jaelee participated in and won numerous music and dance competitions, but as she began her teen years, she found herself drawn more to performance than competition. Soon, she was attracting attention for her rich voice and interpretative ability, recording not only with her father, the Grascals’ Danny Roberts, but with the Tom T. and Dixie Hall-backed Daughters of Bluegrass. By the time she finished high school, she’d been chosen in two consecutive years as a vocal track participant in the industry-leading GRAMMY Camp. Jaelee was an official Bluegrass Ramble Showcase artist at IBMA’s World of Bluegrass in 2019 as well as being a 2020 IBMA Songwriter Showcase artist. In 2021, Jaelee released three singles after signing with Mountain Home Music Company, was invited to join the multi-award winning, all-female supergroup Sister Sadie on guitar and vocals, received the IBMA Momentum Vocalist of the Year and IBMA Vocal Group of the Year awards and made numerous appearances on the Grand Ole Opry. As the momentum builds for Roberts’ career, she continues to sharpen her knowledge and talent as she pursues her commercial songwriting degree in the College of Media and Entertainment at Middle Tennessee State University (MTSU) in Murfreesboro, TN.