Jaelee Roberts - Something You Didn't Count On 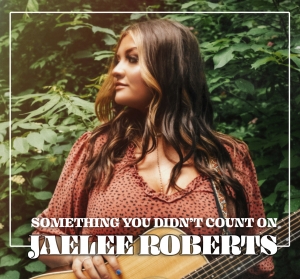 No matter what location can lay claim to being the birthplace of bluegrass, it’s indisputable that the music’s roots in and connection to Nashville’s country music have given rise to a heritage handed down from early stars like the Jimmy Martin and the Osborne Brothers to stars of today like the award-winning Grascals. It’s a heritage that puts a spotlight on great songs and emotive vocals, and makes plain that there’s more to bluegrass than just hot picking and high singing. Now, with the release of Something You Didn’t Count On (Mountain Home Music Company), her debut full-length album, Jaelee Roberts serves notice that this legacy is in the good hands of a new generation.

As the daughter of the Grascals’ Danny Roberts and industry professional Andrea Roberts, one might think that Jaelee’s affinity, not just for mainline bluegrass, but for acoustic country-leaning songs would come naturally—but to do so would under-estimate the intentionality of her choices. Though she relied on award-winning producer-bassist Tim Surrett (Balsam Range) and a clutch of top-notch players, including current Grascal and award-winning banjo player Kristin Scott Benson as well as former Grascal (and current Garth Brooks) fiddler Jimmy Mattingly, there’s no doubt that, whether one looks at the selection of material or the maturity and self-confidence of her compelling vocals, it’s Jaelee herself whose vision informs the entire project.

That vision, and the musical muscle to translate it into polished, yet deeply expressive music had already produced results even before the project was completed. The first single (and title track) showed off Roberts’ bluegrass sensibilities—and, along with colleague Theo MacMillan (Theo & Brenna)—her songwriting chops, too, while subsequent releases revealed her religious faith (“Still Waters”), affinity for finely-crafted Music Row balladry (“Think Again”) before circling back to pure bluegrass with “You Can’t Stop Me From Staying,” written by rising star Molly Tuttle and award-winning tunesmith Jon Weisberger.

The complete collection reaches even more broadly, including more of Roberts’ originals (“November,” also written with MacMillan, heartbreak ballad “The Beginning Was The End,” written with rising singer/songwriter Mallory Eagle, and the melancholy “Lie To Me,” written with Kelli Kingrey and the prolific Jerry Salley); a gospel classic-in-the-making (“I Owe Him Everything”) from southern gospel hitmaker Lyn Rowell, and a archetypal slice of Nashville ‘grass in “Sad Songs.” And just to make sure that every aspect of Roberts’ musicality gets its due, there are two appealing covers—one a recap of Gram Parsons’ “Luxury Liner” that tips its hat to Emmylou Harris’ 1976 recording, the other a glistening reading of “Landslide” that wraps country and bluegrass giant Vince Gill’s velvet harmonies around Roberts’ wistful lead vocal.

“To be honest,” Roberts confesses, “This album is simply a dream come true for me! I have been thinking about making an album since I was just a little kid, because I’ve always known that music was going to be my lifelong pursuit and that I want to share the music in my heart with other people. I’m so thankful to Mickey Gamble and everyone at Mountain Home Music for taking a chance on me and signing me to the label when I was just 19 years old and with very little touring/stage experience. It means so much to have a group of people that believe in you, and I’ll forever be grateful to them for this opportunity.”

“The album came together in two different recording sessions and started during the height of the pandemic in 2020,” she notes. “Going into the studio the first time I had a good idea about what I wanted to do, because I’d been thinking about it for a long time. I love writing songs and it was very important to me to include music that had come from my heart so that people could really get to know me in my debut album. Then, before going in to record the second set of songs, I had time to really think about how I wanted to round out the album, and to spend time digging through material from other writers. I wanted to make sure that the songs told different stories and that the tempos were different and so on – it’s important to me that it feels like an album and not just twelve singles.”

“The experience of having these songs come to life,” Roberts concludes, “Is something that I will always cherish and I’m already anxious to do it again. I am so thrilled to share my first album filled with music that I love, and I sure hope that everyone enjoys listening to it!”

Since the beginning of last year, Jaelee Roberts has released those four singles, earned a coveted Momentum Vocalist of the Year award from the International Bluegrass Music Association and joined Sister Sadie—the all-woman group that earned an IBMA Entertainer of the Year trophy in 2020 and three consecutive (2019-2021) Vocal Group of the Year honors—as lead singer and guitarist. Now, with the release of Something You Didn’t Count On, the young singer/songwriter announces that she’s ready and willing to take center stage on her own.

About Jaelee Roberts
Though just 20 years old, Music City native Jaelee Roberts, is already more than a little familiar with — and to — the music industry. Born to veteran music professionals, she grew up backstage at the Grand Ole Opry and in the middle of rehearsals, business meetings and recording sessions, along with plenty of festivals and concerts. Roberts got her start singing in church at a very early age and began her journey as an instrumentalist at age 4 with fiddle lessons; since then, she has added guitar, mandolin and piano to her musical arsenal. Jaelee participated in and won numerous music and dance competitions, but as she began her teen years, she found herself drawn more to performance than competition. Soon, she was attracting attention for her rich voice and interpretative ability, recording not only with her father, the Grascals’ Danny Roberts, but with the Tom T. and Dixie Hall-backed Daughters of Bluegrass. By the time she finished high school, she’d been chosen in two consecutive years as a vocal track participant in the industry-leading GRAMMY Camp. Jaelee was an official Bluegrass Ramble Showcase artist at IBMA’s World of Bluegrass in 2019 as well as being a 2020 IBMA Songwriter Showcase artist. In 2021, Jaelee released three singles after signing with Mountain Home Music Company, was invited to join the multi-award winning, all-female supergroup Sister Sadie on guitar and vocals, received the IBMA Momentum Vocalist of the Year and IBMA Vocal Group of the Year awards and made numerous appearances on the Grand Ole Opry. As the momentum builds for Roberts’ career, she continues to sharpen her knowledge and talent as she pursues her commercial songwriting degree in the College of Media and Entertainment at Middle Tennessee State University (MTSU) in Murfreesboro, TN.