J. D. Crowe and The New South with Keith Whitley 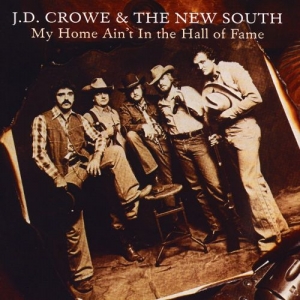 
J.D. Crowe and The New South with Keith Whitley
In the late '70s, banjo virtuoso and bandleader J.D. Crowe was one of several forward-looking bluegrass artists looking to expand the music's stylistic boundaries. Bands like the Country Gentlemen and the Seldom Scene did so by taking rock & roll songs and giving them relatively traditional bluegrass settings; Crowe's approach, at least temporarily, was to bring steel guitar, electric bass, and drums to bear on bluegrass material. The resulting sound on this 1978 recording was completely different from most of what was then being called "progressive bluegrass," and in fact, to call this album "progressive bluegrass" would be rather misleading.

Basically, this is a honky tonk album with a banjo and a few bluegrass numbers thrown in. On "(I'll Be Your) Stepping Stone," singer Keith Whitley sounds like he's building an altar to George Jones, and the band's version of "Lady" sounds like a Bellamy Brothers outtake. Even the relatively straightforward bluegrass number "She's Gone, Gone, Gone" and the heavily bluegrassified arrangement of the old Flying Burrito Brothers number "Sin City" prominently feature pedal steel and drums. None of this is a criticism; in fact, many of these arrangements work beautifully, and the combination of Crowe's brilliant banjo picking (listen to his backup work on "Will You Be Lonesome Too?") and Whitley's even more brilliant singing is pretty much unbeatable. But bluegrass purists should consider themselves duly warned.
37
What's This
Advertisement