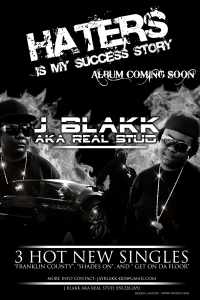 Borned and raised in Apalachicola (Franklin County), Florida, J.Blakk grew up in the projects, surrounded by poverty and drugs. Raised in a single parent home, J.Blakk always knew she wanted to be a DJ, but never thought it possible since her mother did not have the money and could not afford the equipment. After many years of hanging in the streets of Franklin County, getting into trouble and doing whatever to get money, in 1997, J.Blakk moved to Tallahassee (Leon County), Florida with her mother in an effort to start a new and better life. In 2001, J.Blakk graduated from Amos P. Godby High School and Florida A&M University in 2006. Still with the love and passion for music in her heart, in 2007, J.Blakk began working with delinquent children, while still trying to pursue a music career. J.Blakk began hanging out with close friend, Sacred, and cousin, G2, and began learning the ins and outs of the music world. She also began to learn and understand the business side of the music industry as well as learned how to do standard verse. In the summer of 2008, Sacred placed J.Blakk on one of his singles. Since being on Sacred's single, J.Blakk has put out two singles, opened up for Rareed, completed drops for local DJs, and has performed in several shows around the Leon County and Franklin County areas.