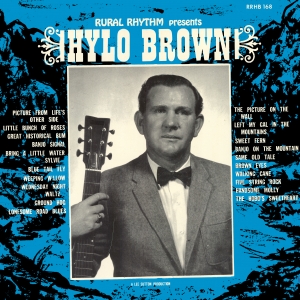 
HYLO BROWN & The Timberliners
Frank Brown earned the nickname "Hylo" because of his considerable vocal range that became his trademark. Born in 1922 in Johnson County, KY, which also became the birthplace of Loretta Lynn, Brown had thoroughly absorbed the music indigenous to his Appalachian home.

Hylo Brown and the Timberliners released their first album in 1958 on Capitol Records and it remains a traditional bluegrass classic album. The group was short lived and had a few band changes with Norman Blake on dobro and Billy Edwards on banjo and soon after breaking up Brown rejoined Flatt & Scruggs as a featured singer.

In the early '60s, Hylo Brown cut a handful of solo records, including 1961's Bluegrass Balladeer, 1962's Bluegrass Goes to College, and the next year's Hylo Brown Meets the Lonesome Pine Fiddlers.

Hylo Brown recorded seven albums for Rural Rhythm Records in the late 60’s with Lee Sutton as producer. Hylo Brown & The Timberliners was the first of the seven albums and was originally released in 1967. Uncle Jim O’Neal, creator of Rural Rhythm Records, was the architect behind Hylo Brown performing all the standard traditional songs that have been handed down through the generations on these seven classic albums.

After recording seven albums for Rural Rhythm Records Hylo ‘s recordings became fewer and news of him was hard-to-find. He broke up his band and retired from the road in the 1980’s and eventually passed away on February 2, 2003.