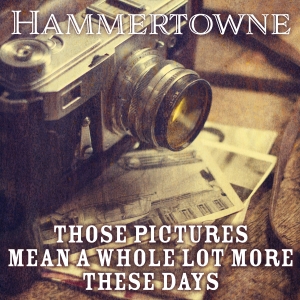 Since the band's mega hit single, Hillbilly Heroes,
and its accompanying album, fans have long awaited for new music from Hammertowne. Mountain Fever Records is pleased to deliver just that - more incredible, original music from these fine gentlemen.

We are pleased to offer you "Pictures" by Hammertowne!

In this day and age, it's tough for a musical unit to create something that doesn't mimic someone else's sound, past, or present. In order to do that, a band must have the ability to compose their own material and product. And it's not just a matter of writing their own songs. It's creating their own identity and musical personality. That is what HAMMERTOWNE has been able to do from day one. Day one, by the way, did not come pre planned. It came as the result of a happenstance bout of instant musical comradery during a recording session among five musicians. The music was just too good to end with the conclusion of that recording session in 2012.

HAMMERTOWNE, is a somewhat tradional, somewhat progressive Bluegrass Band from the hills of Eastern Kentucky. They write and perform the vast majority of thier own songs, with a garnishment of traditional favorites mixed in along the way. Individually, they have paid ample dues with
decades of experience playing along side some of the biggest and most respected names in the business such as Doyle Lawson & Quicksilver, Dave Evans & Riverbend, Ernie Thacker & Route 23, Del McCoury, and The James King Band, to name a few. In HAMMERTOWNE, those years of experience are combined with a young, intense, and talented element, that makes for some serious, musical weaponry. Now, expanded to a six piece unit which includes no less than five stellar and versitle vocalist, six very credited song writers, and a boat load of instrumental prowess,
HAMMERTOWNE is making music that is sure to be in high demand for many years to come.