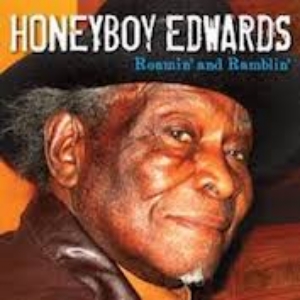 David “Honeyboy” Edwards was one of the last of the original Delta Bluesmen who traveled the South as hobos in the 1930s and who shaped early folk music into what later generations turned into rock ‘n’ roll.

Honeyboy Edwards was born in the Mississippi Delta in 1915, the son of a sharecropper. After meeting Delta blues guitarist Big Joe Williams, he left home at age 17, and traveled the South by hopping freight trains. Honeyboy worked with Robert Johnson, Howlin’ Wolf, Sonny Boy Williamson, and countless others while honing his musical skills on the streets and in juke joints across 13 states.

Not long after recording with Alan Lomax for the Library of Congress in 1942, Honeyboy met teenage blues harmonica player Little Walter Jacobs, and took Walter to Chicago, where they frequented the city’s famous Maxwell Street Market. After a short stint there, Honeyboy recorded for the Artist Recording Company in Texas, and for Sun Records in Memphis. Returning to Chicago, he recorded for Chess Records. After deciding to make Chicago his home, he quickly became known as one of the city’s finest slide guitarists.

In the 1960s he recorded for Milestone, Adelphi and Blue Horizon labels. In the late 60s, the original Fleetwood Mac asked Honeyboy to play on their Blues Jam in Chicago sessions. Over the years that followed, he recorded albums for the Trix, Earwig, Roots, Folkways, Blue Suit and Acoustic Sounds labels.

His many awards and honors include the Blues Foundation’s W.C. Handy Award, the National Academy of Recording Arts and Sciences Lifetime Achievement Award, and the National Endowment for the Arts Heritage Fellowship award. He also received a Grammy for best traditional blues album for his work on “Last of the Great Mississippi Delta Bluesmen,” which also featured Pinetop Perkins, Henry Townsend & Robert Lockwood Jr.
24
What's This
Advertisement