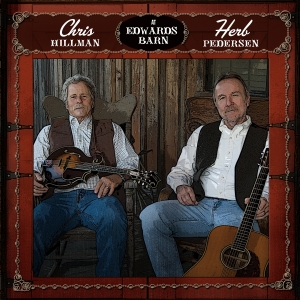 Turn, Turn, Turn (To Everything There Is a Season)
(words from the Book of Ecclesiastes, adaptation and music by Pete Seeger – Melody Trails, Inc., BMI)

If I Could Only Win Your Love
(Ira Louvin, Charlie Louvin – Sony/ATV Acuff-Rose Music, BMI)

To define Chris Hillman in a single word – well, good luck with that. After coming of age in the psychedelic ferment of mid-Sixties Los Angeles, Chris took flight as a Byrd, found brotherhood amid Flying Burritos, flourished as a Desert Rose, and emerged a titan of country and bluegrass around the same time he was being enshrined in the Rock and Roll Hall of Fame…Such individuals defy easy categorization.

But if I had to take a crack at it, I’d say: open. Chris is an incredibly open guy. Here I am, for example, writing these liner notes based on nothing more, really, than a single, fascinating breakfast meeting, wherein I, avid fan and reporter, spitefully forced Chris into the position, biologically uncomfortable for him, of doing all the talking. But Chris was open to that. I wanted to hear all the old stories about McGuinn and Crosby, Lennon and McCartney, Monterey and Altamont – and where a veteran of all that might’ve had good reason to forget, Chris cracked open the vault, and his heart.

Decades earlier, he’d been open, when the call came, to playing electric bass for the Byrds, even though he’d never done that before. He openly took all kinds of abuse from Larger Egos, as bass players generally did back then, for the sake of what’s always been his Larger Cause, Chris’s mistress: the music. And he was open, in the hipper-than-thou era of Blind Faith and Led Zeppelin, to what were widely considered the moribund forms of country and bluegrass, seeing their “crossover” potential when Garth Brooks was still attuned, principally, to Merry Melodies.

Yet for all his openness to new people and things – reflected in authorship of ten Top Ten hits across diverse Billboard charts, and an enduring fan base – Chris remains abidingly loyal: to values, genres, tunes, a beloved hook or riff, and above all, to fellow musicians. Case in point: Herb Pedersen. The two men’s musical partnership began in 1963, pre-dating the Byrds. It continued in the mid-Seventies; how apt that Herb’s otherwise fastidiously detailed history of his studio session work, as published on his website, should list a perplexed “1974 (?)” beside his first collaboration with the Burritos – easy categorization, defied again! Their bond found fullest expression in the Desert Rose Band, in the 1980s, and remains vibrant today, as the album you hold in your hands so unmistakably attests.

That’s a lot of miles traveled together…And to hear Chris and Herb – and their accomplished band mates David Mansfield, Larry Park, and Bill Bryson – hold forth in an intimate and relaxed setting, as captured here on At Edwards Barn, is to marvel at the extraordinary range of their passions and performances. You get, for starters, some classic Byrds: Beyond “Turn! Turn! Turn!” and “Eight Miles High,” cultural landmarks both, there is “Have You Seen Her Face,” at once sunny and wistful, and one of the most stylish pop songs the West Coast produced in the mid-Sixties.

Then comes the Burrito era, when Chris and the late Gram Parsons redrew the musical landscape, farsightedly fusing rock and country with a fluidity that blew away Dylan, the Stones and other influential fans. We revisit “Sin City” and “Wheels,” two songs which, with our grim knowledge that Parsons would be dead by 1973, evoke sentiments and meaning inconceivable when they were first released. The latter exhorts us not to fear death; in the former, released on the Burritos’ 1969 debut LP, it was as if Parsons foresaw his own: “If you’ve got some money to burn/Take it home right away/You’ve got three years to pay/But Satan is waiting his turn.”

At Edwards Barn also rewards visitors with an upbeat rendition of “Love Reunited,” the first Desert Rose hit; a Buck Owens cover (“Together Again”); some obscure country gems (“Wait A Minute,” a lilting Pedersen composition from 1972); strains of gospel (“Our Savior’s Hands”); and even a dalliance with Mexican balladry (“Tu Cancion”).

So close your eyes and surrender to the pleasure attendant when crackerjack musicians who’ve been at it forever reunite once more, brought together to reaffirm and surprise each other, give and take, know and intuit – and remain open, at all points, to the mysterious and seductive possibilities of a special evening and their shared magic.

James Rosen is a Washington correspondent for Fox News and the author of The Strong Man: John Mitchell and the Secrets of Watergate.

Thanks to Nick Hillman, Alan Rockman , Ron Dalzell, Eric Montieth and Dave and Teri Edsall for all of their help. Thanks to Paul Lohr and associates at New Frontier Touring.
To Mavi and Dave Edwards, thanks so much for allowing us into your beautiful barn.

Special thanks to Father Lawrence Russell and the parishioners of the Orthodox Church of the Annunciation.

This live recording grew out of our annual benefit concert for the building fund of the Orthodox Church of the Annunciation of Santa Maria, California and the Gobezie-Goshu Home for the Elderly in Adwa, Ethiopia.