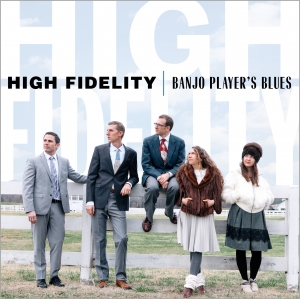 Banjo Player’s Blues, High Fidelity’s second recording for Rebel Records, is a showcase of the band’s love for tradition, brother duets, virtuosic instrumental innovators, well-crafted harmony, gospel music, and banjos. This album delivers these characteristics flawlessly, presented by a band consisting of talented singers and multi-instrumentalists. Their love for the sometimes overlooked early innovators of this music is evident throughout and is presented so authentically as to make these uncommon songs seem both fresh and familiar. Even the tracks that listeners might recognize come from such an uncommonly traditional source that their delivery feels as new and exciting as when they were originally recorded.

The opening song, “Old Home Place,” is not the often-rendered classic from the Dillards but rather a nearly forgotten Reno & Smiley number revived here. The tone, drive, and phrasing of Kurt Stephenson’s banjo kick-off display his undeniable talent and knowledge of different bluegrass banjo traditions. This is followed by “You Made the Break” from Paul and Roy, the Tennessee River Boys, which features the beautiful brother duet style singing of Jeremy Stephens and his wife Corrina Rose Logston, whose traditional yet distinctive style of fiddling is also showcased.

High Fidelity has been influenced by many of the bluegrass greats, including Jim & Jesse. “Tears of Regret” is an early Jim & Jesse recording which features a collaboration with Jesse McReynolds himself. Jesse is the oldest active member of the Grand Ole Opry and appears on this song almost exactly 65 years after its original recording. “The South Bound Train,” is another Jim & Jesse original that was recorded in the 1960s but did not see the light of day until it was released commercially in the 1990s. Reimagined with twin banjos, it is a high-intensity number featuring the trademark vocal trio of Jeremy, Corrina, and Kurt.

This album showcases the tight musical relationships formed in the band during their years of touring. Bassist Vickie Vaughn and mandolin player Daniel Amick lend their voices to “His Charming Love,” an early quartet style gospel song, and Vickie takes the lead on the Stewart Family’s “Dear God.” “Turkey in the Straw" showcases Corrina’s expert hoedown-style fiddling while Daniel, usually on mandolin, takes up the guitar on this track. Twin banjos have become a regular staple on High Fidelity recordings, and they are featured on three numbers here. In addition to “The South Bound Train” and “Turkey in the Straw” mentioned above, the group deploys double banjos on “Feudin’ Banjos” with Kurt on 5-string banjo and Jeremy playing tenor banjo in a tribute to the original 1955 version by Arthur Smith and Don Reno that was later immortalized in the movie Deliverance.

High Fidelity is able to offer their listeners a chance to experience the riveting energy and grit of early bluegrass that doesn’t sacrifice precision for purpose. Where many other bands offer a pale imitation of the past, High Fidelity presents a meaningful interpretation that captures the true essence of the music they learned from the genre’s early masters. Every note here on Banjo Player’s Blues is delivered with meaning, reverence, and undeniable talent.