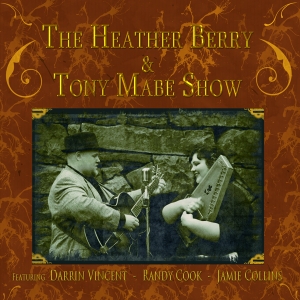 Pure. Honest. Heartfelt. Sincere. All of these simple words sum up Heather Berry and her music. A Virginia native, Heather has a strong love for the traditional country music that she first heard from the Carter Family. Thusly, she learned to play an arch top guitar accompanying herself in a Maybelle Carter-esque manner. The simplicity of which, combined with her song-bird singing is truly unparalled. "Jamie and I saw Heather for the first time at the Country Music Hall of Fame for the induction of Tom T. Hall", states Darin Vincent. "She amazed all of us with her powerful vocal performance & Mother Mabelle Carter style guitar. I remember goose bumps all over my arms and I found it hard to breath listening to that performance". That appearance came with an invitation from Dailey & Vincent to join them the next summer in Nashville, Tennessee for Bluegrass Nights at the Ryman, where Heather brought a sold-out audience to their feet with her haunting performance of Tom T. Hall's "Can You Hear Me Now". Tony Mabe, also an accomplished musician on several instruments including both clawhammer and Scruggs style banjo, guitar, mandolin and autoharp, is the perfect complement to Heather both on an off stage; the two have been married for nearly six years. One without the other is beautiful enough but combined, the two are musical perfection. The Heather Berry & Tony Mabe Show has unassumingly evoked emotions among their listeners and delightfully captivated many faithful followers.

Tom T. and I had Heather, herself, pegged for a while now as being "as awesome as Allison, of the caliber of Emmylou and unassumingly sharing the legendary quality of Maybelle." Then along came Tony to add even more magic and creating what is now the Heather & Tony show. To quote Tom T., "Heather and Tony go together like biscuits and gravy; my favorite music and my favorite breakfast."

During the medallion ceremony, when Tom T. was inducted into the Country Music Hall of Fame, Heather and Tony with autoharp, guitar and Heather's voice brought the crowd of music world dignitaries to its feet. Later former head of Opryland Bud Wendell prophesied "Miss Dixie, your girl is going to be a great star". Accolades for the talented twosome flow freely through multiple genres including bluegrass, country, gospel, folk, Americana and from many areas of musical involvement. It impresses us that we are in accord with intelligent well informed people of such good taste.

“Heather Berry’s pure, angelic voice brought us to our knees the first time we heard her sing. She has been uniquely blessed with a pure talent and love for acoustic roots music that will endear anyone who hears her.” ~ Laura & John Carter Cash

“In the music business, we spend a lot of time talking about purity, beauty, tone, pitch and heart. Then Heather Berry sings and we just shut up and listen.” ~ Peter Cooper, Senior Music Writer, The Tennessean, Americana artist, Grammy nominee


“Her guitar and autoharp playing and singing is so Carter Family like she should’ve been born a Carter. As far as I’m concerned she is one.” Dale Jett, son of Janette Carter, grandson of Sara & AP Carter

We’re proud of you Heather & Tony. Thanks for recording our songs. Walk Slow! ~ Dixie Hall