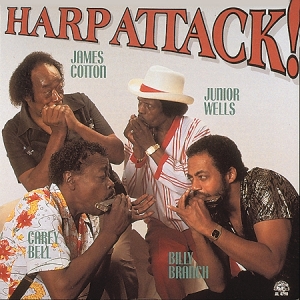 If there is one sound that says "Chicago Blues" to the world, it's the sound of a harmonica blown through a hand-held microphone blasting through an amplifier. The pressurized, distorted sound of the electrified blues harp was there from the earliest days of post-World War II Windy City blues, and Chicago's harp players have always been the standard against which all others are judged.

This album brings together four of Chicago's finest. Three of them have occupied the hottest harmonica spot in the blues world: the featured soloist in the Muddy Waters Band. Junior Wells, Carey Bell and (for a decade) James Cotton have all held that coveted slot. Carey and Billy Branch were chosen by Willie Dixon for the featured spot in Willie's Chicago Blues All Stars. All four men have been fast friends for years. They've jammed with each other's bands in the city's blues clubs and on concert stages around the world, but they've never recorded together before.

James Cotton's overpowering sound is one of the most recognizable of any harp player's. James learned from the best that the Mississippi Delta had to offer. He was born in Tunica, Mississippi in1936 and left home at nine, searching for his idol, Rice Miller (a.k.a. Sonny Boy Williamson II). Sonny Boy tutored the boy, and Cotton was playing behind Howlin' Wolf and Junior Parker while still a teenager. He cut his first single for the famed Sun Records label at the age of 18. In 1954, Muddy Waters heard the youngster playing in Memphis and invited him to move to Chicago and join the band. Over the next eleven years with Muddy, Cotton played the classic solos on dozens of Muddy's records including Got My Mojo Working and Walking Through The Park. Cotton left Muddy in 1966 to form his own band. Since then he's toured literally around the world and cut a dozen albums for various labels including two in the late 1980s for Alligator. James is the most visible of all Chicago harp players and one of the most popular bluesmen in the world.

Junior Wells' career started even before Cotton's. Born in Memphis in 1934, Junior began playing harp while still a child. Moving to Chicago in 1946, he sought out the blues stars of the older generation including Tampa Red and Johnny Jones, who slipped young Junior into the blues clubs to sit in. "Little Junior" was a local star at the age of fifteen, leading a band that included the Myers Brothers, who later joined Little Walter in The Aces. Junior recorded as a sideman with Muddy Waters at sixteen, and began cutting singles under his own name at 19, including classics like Hoodoo Man Blues, Messin' With The Kid, and Little By Little. When the great Little Walter, the harp player with Muddy's band, had his own hit with Juke and decided to start a solo career, Muddy called on young Junior to fill the place of the acknowledged master. Junior's tenure with Muddy was cut short by the draft but he went AWOL to cut Standing Around Crying with Muddy. Junior's singles made him a local star in the '50s and early '60s. He began making albums in 1966 backed by the guitar of his partner, Buddy Guy.

Since then, Junior and Buddy have become the most famous team in the blues. Junior's style has always been cleaner, less distorted than other Chicago bluesmen, reflecting the early influence of both John Lee "Sonny Boy" Williamson and Rice "Sonny Boy II" Miller. Beginning in the '60s, Junior developed a distinctive percussive, staccato style that brings a contemporary, funky feeling to his playing.

Carey Bell, though not as well known as James or Junior, is a harp player's harp player with a worldwide reputation among blues afficionados. He was born in 1936 in Macon, Mississippi and began playing professionally at 13 with his godfather, pianist Lovie Lee. When Lovie moved to Chicago in 1956, he brought Carey along. Carey's career in the Windy City had a slow start; he worked a series of day jobs while playing at night with Lovie and Honeyboy Edwards and taking lessons from Little Walter and Big Walter Horton, the man Carey considers his musical "father." Carey didn't get a recording break until 1968, when he cut as a sideman with Earl Hooker. Charlie Musselwhite brought Carey to Delmark Records in 1969 to cut his debut album, Carey Bell's Blues Harp. Carey and his band took up residency at Big Duke's Flamingo Club on the West Side for most of 1969 and 1970, until Muddy Waters called. Carey played with Muddy for a year and cut two albums with him, one in London with Steve Winwood and Rory Gallagher, the other in Chicago. Leaving Muddy to restart his solo career, Carey went on to cut for ABC Bluesway and to co-produce and play on Big Walter Horton's album for a fledgling label called Alligator (Big Walter Horton with Carey Bell is still in print.). He joined Willie Dixon's band in 1973 and when he left he introduced Willie to a young harp player named Billy Branch. For the last decade, Carey has spent as much time in Europe as in the US, touring with his guitarist son Lurrie and recording for a number of European labels. Like Big Walter, his sound is melodic and his dynamics are very broad (he'll go from a blast to a whisper in a second). Carey is an absolute master of the big double reed chromatic harmonica.

Billy Branch probably plays more in Chicago than any other harp player. As leader of The Sons of Blues, he works four or five nights a week in clubs all over the city, taking off occasionally for a road trip or overseas tour. Billy was born in 1953 on the outskirts of Chicago, but he grew up in California, where he took only a casual interest in the blues. When he returned to Chicago in 1969, the blues bug bit him hard. He burst onto the local scene in 1975 in a much-publicized harp showdown at the Green Bunny Club on the South Side, where the audience almost attacked the judge to force him to give the first prize to Billy. Within a couple of months he cut his first session for an anthology on the Barrelhouse label. When Carey got ready to leave Willie Dixon's band, he brought his young trainee in to fill his slot. When Billy wasn't on the road with Willie, he put together his own band, The Sons of Blues, with Carey's guitarist son Lurrie Bell. They made their recording debut on Alligator's Grammy-nominated Living Chicago Blues series in 1979 and went on to cut for the Red Beans label and the French Isabel label, as well as on Alligator's The New Bluebloods anthology. Billy became one of the city's leading studio players, cutting behind Lonnie Brooks, Koko Taylor, Johnny Winter, Lou Rawls and Son Seals as well as Willie Dixon. For the last decade he's been leading The Sons of Blues and pioneering a "blues in the schools" program in the Chicago Public Schools. Billy's sound ranges from the power of Cotton to the melody of Carey (and Big Walter), but he brings a jazzy, contemporary concept to the harp as well as tremendous swing and control. Billy is generally acknowledged by his elders to be the heir apparent to the Chicago blues harp crown. As he says of James, Junior and Carey in New Kid On The Block, they taught him well.

Joining the harp players is an all-star rhythm section hand picked by James and Junior. Michael Coleman grew up in a Chicago blues family and played with Cotton for much of the '80s before starting his own band. He made his debut as a leader on Alligator's New Bluebloods album. Lucky Peterson has been playing blues keyboards since he was three years old. He grew up in a "chitlin' circuit" roadhouse in Buffalo and was discovered by Willie Dixon, who produced his first album (when Lucky was five). He went on to work as a teenage sideman with Bobby Bland and Little Milton. Now 26, Lucky leads his own band and has cut two albums for Alligator. Johnny B. Gayden is generally considered one of the best blues bass players in the world. He's toured with Albert Collins for the last ten years, but returns to Chicago to gig when Albert's off the road. Johnny has cut with Johnny Winter, Son Seals, A.C. Reed and of course, Albert Collins. Ray Allison came out of Buddy Guy's band to join the Muddy Waters Band in the late '70s. After Muddy's death, he was recruited by James Cotton and continues to tour with Cotton. Ray has recorded not only with James, but also with Koko Taylor, Buddy, Michael Coleman and many others.

Besides the four great harp players on the album, Alligator wishes to acknowledge the depth of blues harp talent in Chicago, from first generation veterans like Snooky Pryor, Little Willie Anderson and Big Wheeler to innovators like Sugar Blue. We also would like to pay tribute to the excellent young generation of players nationwide who are dedicated to preserving the sounds of classic '50s Chicago blues harmonica.

This album is dedicated to the four men who virtually invented modern blues harmonica: John Lee "Sonny Boy" Williamson; Rice "Sonny Boy Williamson II" Miller; Little Walter Jacobs and Big Walter Horton. Directly or indirectly, they were the teachers of every harp player who followed them, and their music will never be surpassed.