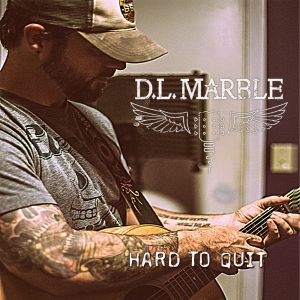 Like a back country crossroad, the songs of sing-er/songwriter D.L. Marble are a rich tapestry that is American story telling at its best.
With influences like Robert Earl Keen, Ray Wiley Hubbard & Fleetwood Mac, D.L. Marble’s music blends traditional Country, Americana, Rock, and Blue-Eyed Soul into songs that are very honest and uniquely American.
Many of the characters that populate D.L.’s songs come from his own personal experiences growing up in a less than ideal version of the American dream. D.L. was raised by a single mom while his dad spent decades in a Texas prison. Looking for an escape from his situation at home and school, D.L. picked up his 1st acoustic guitar & discovered his true calling.
After trying his hand in several professions, D.L. kept coming back to his song writing, it was the one constant in his life. D.L. knew that he could no longer ignore his musical destiny. The result was his debut album titled “Not the One” that was a critical success – earning an Album of the Year #22 ranking on the 2012 Americana Music Show and a #25 ranking on Alternate Roots Magazine’s 2012 Route 66 Americana Chart, along with radio play in over 60 stations across the U.S.
Touring the United States for the past few years has been a tremendous part of building D.L.’s fan base. Sharing the stage with music icons such as Joe Nichols, Gretchen Wilson, David Allen Coe, Montgomery Gentry, and dozens more, D.L. has cut his teeth and is now more than ready to per-form on the main stage.

In the spring of 2015 D.L. & his band partnered up with producer Rob Hill at his Los Angeles studio, and they have recently completed and plan to release D.L.’s sophomore album “Hard to Quit” (E.T.A. summer 2015) to an anxious audience hungry for some exciting & honest new music.
“Hard to Quit” is 12 original songs telling stories of the tragedy and triumphs of an American life.
We hope you listen & enjoy !!!
8
What's This
Advertisement