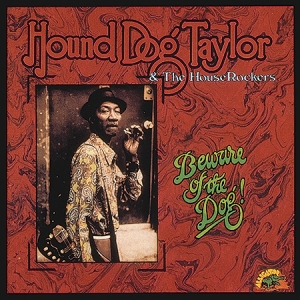 
When Theodore Roosevelt "Hound Dog" Taylor sat down on his battered folding chair, slipped his steel slide onto his six-fingered left hand and tore into one of his foot-stomping shuffles, supercharged boogies or a searing slow blues, he had one thing in mind--making people forget their troubles, either by dancing or by immersing themselves in the deepest of bottleneck blues. And whether he was playing for old friends at one of Chicago's inner-city bars or for thousands of college kids and hippies at clubs and campuses around the country, Taylor's music never changed. With just two guitars and a drum set, Hound Dog Taylor and the HouseRockers created a rocked-out, hypnotic, ultra-danceable sound that is as emotionally powerful and wildly energizing today as it was the day they produced it.

Without a drop of slickness, Taylor's electrified blues was feral, rocking and raw. Village Voice music critic Robert Christgau referred to the band as "the Ramones of the blues," and it's easy to understand why. Taylor played fast, loud and sloppy, and would sometimes hit bad notes or get out of tune. But he always made primeval, soul-satisfying music. Nobody could match him when it came to emotional fervor and the pure joy of making music. Songs like "Give Me Back My Wig," "She's Gone," and "Walking The Ceiling" are now considered blues classics. "Live wire exuberance and hard-as-nails force," said Rolling Stone, "natural for partying, drinking and talking loud."

Now, for the first time in 22 years, there's finally more Hound Dog Taylor music to be heard. Release The Hound is a sizzling collection of some of the best previously unreleased Hound Dog Taylor material in existence. Featuring over 68 minutes of music, Release The Hound boasts 14 live and studio performances, including stunning versions of "Wild About You, Baby," "What'd I Say?," "She's Gone," "Sen-Sa-Shun" and "Gonna Send You Back To Georgia." Taylor's wild guitar exuberance and joyous, soulful abandon fuel each and every song. Three instrumentals on the CD showcase Brewer Phillips' crazed lead guitar playing. From the audience reactions on the live cuts to the untamed blues energy of the studio tracks, Release The Hound will delight old fans and introduce new ones to Hound Dog Taylor and the HouseRockers' one-of-a-kind blues experience.

Born in Mississippi in 1917, Taylor didn't start playing guitar until he was 20. He worked as a sharecropper by day and played at Delta juke joints and house parties in the evenings. After a harrowing encounter with the Ku Klux Klan in 1942 (he had a cross burned in his yard), Taylor moved north to Chicago, where he performed at the famous outdoor market on Maxwell Street, competing for tips with Muddy Waters and Robert Nighthawk. Hound Dog played in ghetto bars at night while working a factory job until the late 1950's, when he became a full time musician. He recorded one single, "Christine" b/w "Alley Music," for Firma Records and another, "Take Five" b/w "My Baby's Coming Home," for Bea & Baby Records in the early 1960's. Both records were good local sellers but went largely unnoticed outside of Chicago. A session for Chess remained unissued until the 1990's. Taylor toured Europe without his band as part of the American Folk Blues Festival, playing behind Little Walter and others, but never got a chance to show European audiences the magic of his own music.

In all, Taylor recorded a total of three Alligator albums before dying of cancer in 1975. Aside from his self-titled 1971 debut, Taylor's records are 1974's Natural Boogie and 1976's live, Grammy-nominated Beware Of The Dog!,released shortly after his death. The success of these records gave life to Alligator, allowing the fledgling label to survive and eventually thrive. In 1982 Alligator issued the Grammy-nominated Genuine Houserocking Music, a collection of unreleased studio tracks. The continuing demand for more of Taylor's material has brought forth a number of poorly recorded, bad sounding bootlegs over the years--recordings for which Taylor and his bandmates never saw any payments or royalties.

Hound Dog Taylor and the HouseRockers played foot-stomping boogies to make fans forget their troubles and dance. They played grinding slow blues to exorcise their demons. "I'm with you, baby I'm with you," Taylor would shout when someone yelled a request out of the audience. "Let's have some fun," he'd holler after sitting down and plugging in his ultra-cheap Japanese guitar into his cracked-speaker Sears Silvertone amp. And with Brewer Phillips playing bass lines on his old Fender and Ted Harvey pounding away at the drums, this three-piece blues band made a lot of wonderful noise. "When I die," Taylor once said, "they'll say, 'he couldn't play **** but he sure made it sound good.'" Almost 30 years after his death, Release The Hound proves just how good that sound can be.