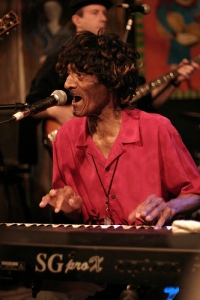 His extroverted antics and multi-colored fright wig might invite the instant dismissal of Cincinnati-based singer Robert “H-Bomb” Ferguson as some sort of comic lightweight. In reality, he’s one of the last survivors of the jump blues era whose once-slavish Wynonie Harris imitations have mellowed into a highly distinctive vocal delivery of his own.

Ferguson’s dad, a reverend, paid for piano lessons for his son, demanding he stick to sacred melodies on the 88s. Fat chance — by age 19, Bobby was on the road with Joe Liggins & the Honeydrippers. When they hit New York, Ferguson branched off on his own. Comedian Nipsey Russell, then emcee at Harlem’s Baby Grand Club, got the singer a gig at the nightspot. Back then, Ferguson was billed as “the Cobra Kid.”

Singles for Derby, Atlas, and Prestige preceded a 1951-1952 hookup with Savoy Records that produced some of Ferguson’s best waxings. Most of them were obvious Harris knockoffs, but eminently swinging ones with top-flight backing (blasting saxists Purvis Henson and Count Hastings were aboard the dates). Drummer Jack “The Bear” Parker, who played on the Savoy dates, allegedly bestowed the singer with his explosive monicker. Other accounts credit Savoy producer Lee Magid with coining H-Bomb’s handle; either way, his dynamite vocals fulfilled the billing.

Ferguson eventually made Cincinnati his home, recording for Finch, Big Bang, ARC, and the far more prestigious Federal in 1960. H-Bomb terminated his touring schedule in the early ’70s. When he returned from premature retirement, his unique wig-wearing shtick (inspired by Rick James’ coiffure) was in full bloom. Backed by his fine young band, the Medicine Men, Ferguson waxed his long-overdue debut album, Wiggin’ Out, for Chicago’s Earwig logo in 1993. It showed him to be as wild as ever (witness the gloriously sleazy “Meatloaf”), a talented pianist to boot, and more his own man than ever before. H-Bomb became a regular on the blues and R&B festival circuit, keeping Cincinnati as his home base until his death there on November 26, 2006.