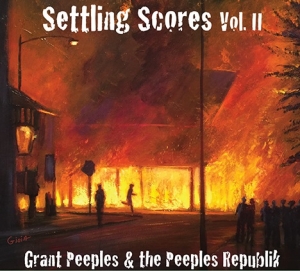 Grant Peeples 2018 release,
Settling Scores Vol. II, is the fourth of Grant's work to be produced by roots icon Gurf Morlix, who also mixed and performs on the record.

In an interview, Peeples cites the social and political upheaval caused by the last presidential election, and responds with, "I feel like I was born for times like this...to make a record like this..."

There are songs inspired by the current political climate (Pitchforks and Torches, It Could Be a Long Night, More for Us-Less for Them). There is a love song that could be the basis and theme for an indie art film (Liliana), a cover of Steve Earle's poignant 'Goodbye', and a rewrite of a 13-minute Bob Dylan tune (The New Brownsville Girl).

As is his way, Grant's earthy vocals vibrate between ominous foreboding, poetic longing and acerbic satire. Settling Scores Vol. II is his tenth release since 2008, and previews from those who know his catalog call this record his most accessible yet.