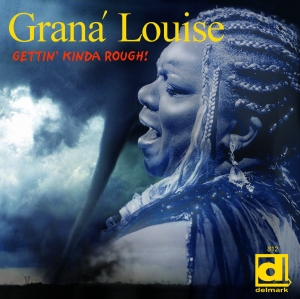 
Internationally recognized vocalist Graná Louise has delighted countless music fans around the world with her outstanding blues performances. Her deep, rich voice belts out the kind of raw, gut blues that makes your spine tingle and your heart ache at her performances at Chicago’s hottest blues clubs including Blue Chicago, Buddy Guy’s Legends, B.L.U.E.S and The Kingston Mines and has been repeatedly featured at the Chicago Blues Festival, singing both blues and gospel. Graná has rocked the house at the acclaimed Apollo Theater in New York and festivals from Detroit to Mexico, to Reykjavik, to the French Riviera, Italy, Austria, Switzerland, Latvia, Germany, Brazil and beyond! Gettin’ Kinda Rough! combines studio and live recordings, brand new original songs, and covers that she’s personalized and made them her own.

The secret to Grana´ Louise's success undoubtedly owes something to the unique combination of her commanding vocal abilities, her audience-engaging personality and her rather unusual and varied songbag. Even the studio portions of this recording convey quite clearly that Graná is a kinetic presence who’s totally in charge of the stage, right down to the hip check on the last drum kick of a number. Give this CD a spin and if it starts to Getting Kinda Rough!, I’d advise you just go with it, baby.


Getting Kinda Rough! is Graná Louise’s first full release on the Delmark label. However, this rising star has already accumulated a modest history with the label, having first landed two tracks on Mojo Mamas, a survey of female Chicago blues talent recorded at Delmark’s Riverside Studios in 2000 and produced by Delmark’s redoubtable Steve Wagner, and issued on the Blue Chicago label. Graná returned to Delmark’s Riverside Studios in 2003 to record a self-produced session which resulted in Generations, put out on her own Crystal Blue imprint. While at Riverside for one of her recording sessions she became a walk-on during a trad jazz session by the Bay City Jazz Band. Renowned Delmark founder Bob Koester had a notion that she would fit right into what they were doing, and in no time had her singing Bessie Smith’s You’ve Been a Good Ole Wagon. The track was included on Bay City’s Alligator Crawl (Delmark 242) release in 2003, and then was also issued on Wild About That Thing: Ladies Sing the Blues (Delmark 913), Delmark’s 50th anniversary collection of recordings by some of the leading female blues and jazz vocalists of the last 50 years.
A native of Columbus, Ohio, Graná Louise made her way to Chicago in 1998 by way of Minneapolis and St. Paul where she performed in blues and jazz clubs. She began her Chicago career singing at Kingston Mines and Blue Chicago and quickly became an established presence on the local music scene, adding such venues as B.L.U.E.S. on Halsted, Redfish and Buddy Guy’s Legends to her itinerary. Only two years after arriving in the Windy City, she was able to secure a coveted spot on the Chicago Blues Festival lineup.
These days she is finding adoring audiences throughout North and South America, and particularly in Europe where she tours frequently and eagerly—despite her dislike of flying.
“Foreign audiences are way more appreciative than American audiences,” states Louise with some chagrin, which is why it was particularly sweet that in 2009 she won the Chicago Blues Challenge, sponsored by the Windy City Blues Society. She won the first round at the Heartland Café on her home turf in Rogers Park, and the final round at Buddy Guy’s Legends. The win entitled her to represent Chicago in The Blues Foundation’s International Blues Challenge in Memphis.
“Winning the Windy City Blues Challenge was great,” says Graná, “Being appreciated at home. Going to Memphis and making history representing Chicago’s first Blues Society to participate in the IBC—awesome!”
“I’d say I have accomplished a whole lot in a short period of time,” Graná says, with no false pride.
The secret to her success undoubtedly owes something to the unique combination of her commanding vocal abilities, her audience-engaging personality and her rather unusual and varied songbag. Her repertoire any given night may include classic blues, songs from the pre-blues folk tradition, original compositions (often with a touch of humor), and, frankly anything that she feels an intense need to share with her listening public.
Graná treats listeners to a heaping helping of variety on Getting Kinda Rough!—from folk to funny to funk. Graná gives a lively retelling of the ageless folk song Stagger Lee to open the set and in between her own compositions she covers Back Door Blues, from Eddie “Cleanhead” Vinson’s songbook, Hey Joe, famously rendered by Jimi Hendrix, plus she sinks her teeth into Denise LaSalle’s funk-tinged Learning How to Cheat on You, Etta James’ Wet Match, Koko Taylor’s Queen Bee (a reworking of Slim Harpo’s King Bee) and Ann Peebles’ timeless I Can’t Stand the Rain.
“Songs I sing by Denise, Etta and Koko,” says Graná, “are crowd pleasers because they tell the truth about life’s experiences that people can relate to. I’m saying out loud what other people only think to themselves. It’s like we’re speaking for them.”
The four playful and provocative originals Graná contributed to the proceedings include the loping Lead Foot Mama, about a genetic predisposition to speeding, Gonna Get ’Cha, an uptempo diatribe on the battle of the sexes (co-written with Bill Syniar), Bang Bang Ba-Bang, a fine funk sketch that might be about great sex or just might be about murder, and Big Dick, M’isipi, which basically proclaims, ahem, that ‘home is where the hard is.’
“Songs like Big Dick, M’isipi just naturally come to me,” says Graná, “I never do something just because people expect me to—that song and Bang Bang, are total imagination! Shock value and fun!”
It might be tempting to say that a good deal of the songs she sings are about men versus women, however I wouldn’t go there if I were you. Graná puts it differently:
“I don’t see it as men versus women as much as it is [about] a woman’s experiences with men,” says Graná. “When a woman tells the truth about what she has gone through in a relationship with a man, then she’s man-bashing or bitter. If it’s a man doing the same thing, then he’s singing the Blues! What’s that about? The old double standard, of course. The songs I choose tell my plights as a woman—period. Women of all races identify and relate to me as an artist and a woman trying to live in a male-dominated world. Audiences get the hard gist of what I’m saying, nationally or internationally. It’s all in the delivery.”
It is indeed in the delivery as anyone who’s seen her perform will attest. Even the studio portions of this recording convey quite clearly that Graná is a kinetic presence who’s totally in charge of the stage, right down to the hip check on the last drum kick of a number.
So there you have it. Give this CD a spin and if it starts to gettin kinda rough, I’d advise you just go with it, baby.
—Justin O’Brien, 2010