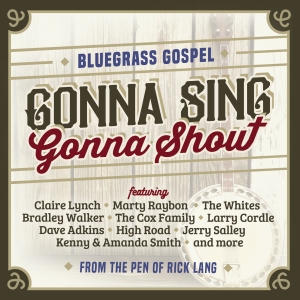 Inspired by the Gospel Music of Bill Monroe, Flatt & Scruggs, Doyle Lawson & Quicksilver, Bluegrass Cardinals, Cox Family among others, I dreamed about recording a gospel album of my own someday. In 2010 that dream was realized when my first all- original Gospel project "Look To The Light" was released. My good friend, Jerry Salley, championed the recording, helping me land a record deal, that paved the way for the album's success. At the time I mentioned to Jerry that if I ever recorded another Gospel album, I wish he would consider producing it for me. Fast forward 8 years and it actually came to be.

Jerry and I started brainstorming for "Gonna Sing, Gonna Shout" in the fall of 2016. I already had a steadily growing catalog of new Gospel material at the time, that benefited by several trips to Nashville to write with Becky Buller, Billy Smith, Jeff Walter, Jon Weisberger & others. Jerry and I got together in the spring of 2017, for three full days writing (one session with Mark "Brink" Brinkman). That resulted in four new songs all of which made it onto the album.

We would have ongoing discussions about choosing which songs to record, arrangements, musicians and vocalists. The core band would be Justin Moses on dobro and mandolin, Aaron Mcdaris on banjo, Jason Roller on guitar & fiddle, Mike Bub on bass. We recorded all the soundtracks in August of 2017, and over the course of the next few months brought in the lead vocalists. The stellar lineup included Dave Adkins, High Road, Marty Raybon, The Whites, Claire Lynch, Bradley Walker, Cox Family, Kenny & Amanda Smith, Larry Cordle & Jerry. All were a great fit for songs chosen, and their performances "over the top". Jerry did a masterful job producing this album, and the end result is beyond anything I could have imagined. I will be eternally grateful to everyone who was involved in the making of "Gonna Sing, Gonna Shout", and sincerely hope folks enjoy listening to each and every track.