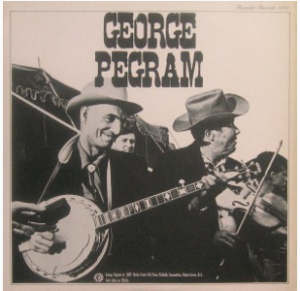 George Franklin Pegram was born and raised in Guilford County, a farming community that was rich in traditional music. Growing up as a teenager, the musician purchased his first Silvertone banjo for $15. He also met Zack Whitaker, a local promoter who organized fiddlers' conventions and showcases while Pegram was growing up. Also influenced by his uncle Clyde Pegram, George began perfecting the "double-thumbing" style of banjo playing, a three-finger movement that used single notes.

At the age of 26, Pegram married Dorothy Louise Dick in Guilford County, then moved to Statesville. Upon entering the navy during the Second World War, Pegram lost one eye during the attack on Pearl Harbor. After working a variety of odd jobs in sawmills and furniture factories, the musician met Bascom Lamar Lunsford, a promoter of folk and "mountain" dance festivals. Needing additional acts to fill various folk festivals in North Carolina, Lunsford signed Pegram and recorded some of his material. Throughout the '50s, he performed with Clegg Garner, Okie Mountain Boys, and Corbett Bennett & His Mountain Dudes. In 1955, Pegram played with Walter "Red" Parhorn and more touring and performing continued.

In 1957, Kenneth Goldstein recorded the duo for Riverside Records. Known for his dynamic and exciting live show, Pegram won a series of annual awards at the Galax Fiddlers' Convention, including the Outstanding Individual Performer in both 1966 and 1969. In 1970, he released his self-titled debut album. The album was the first album ever released on the Boston-based Rounder Records. Pegram continued playing until 1974, with the Asheville Folk Festival that year being his last performance. In September 1974, Pegram died from bone cancer. In 1995, Rounder Records celebrated its silver anniversary by re-releasing the album with six additional tracks.
6
What's This
Advertisement