George Jones - Why Baby Why 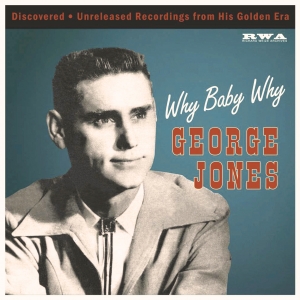 George Jones – Why Baby Why
George Jones greatest successes lay ahead of him when he performed the tracks in this collection – his first number one was just around the corner – and his voice would mature to almost unimagined depth, but there remains something special about his early years, a yet unjaded passion and an unadulterated authenticity that would arguably disappear in the coming years. Even as his voice matured and his abilities deepened, something else was lost which many find in vintage recordings like these.
This rare glimpse of George Jones at his early peak serves as something of a companion to BEAR FAMILY's box set chronicling the complete recordings of Jones STARDAY-MERCURY years, from 1954-61. The ten live tracks on this LP straddle the 1956-57 period when Jones, having broken through on STARDAY, switched to major label MERCURY via a deal between the two labels that had largely been made possible by Jones' success on STARDAY. It captures him not only singing his earliest hits, but also singing songs of his contemporaries, in wonderful fidelity, including Ernest Tubb's classic Let's Say Goodbye Like We Said Hello that he never recorded commercially.

George Glenn Jones (September 12, 1931 – April 26, 2013) was an American musician, singer and songwriter. He achieved international fame for his long list of hit records, including his best known song "He Stopped Loving Her Today", as well as his distinctive voice and phrasing. For the last 20 years of his life, Jones was frequently referred to as the greatest living country singer. Country music scholar Bill C. Malone writes, "For the two or three minutes consumed by a song, Jones immerses himself so completely in its lyrics, and in the mood it conveys, that the listener can scarcely avoid becoming similarly involved." Waylon Jennings expressed a similar opinion in his song "It's Alright": "If we all could sound like we wanted to, we'd all sound like George Jones." The shape of his nose and facial features earned Jones the nickname "The Possum."
Born in Texas, Jones first heard country music when he was seven and was given a guitar at the age of nine. He married his first wife, Dorothy Bonvillion, in 1950, and was divorced in 1951. He served in the United States Marine Corps and was discharged in 1953. He married Shirley Ann Corley in 1954. In 1959, Jones released a cover version of "White Lightning" by J. P. Richardson, which launched his career as a singer. His second marriage ended in divorce in 1968; he married fellow country music singer Tammy Wynette a year later. Many years of alcoholism caused his health to deteriorate severely and led to his missing many performances, earning him the nickname "No Show Jones." After his divorce from Wynette in 1975, Jones married his fourth wife, Nancy Sepulvado, in 1983 and became mostly sober. Jones died in 2013, aged 81, from hypoxic respiratory failure. During his career, Jones had more than 150 hits, both as a solo artist and in duets with other artists.
source: wikipedia

Richard Weize Archives is exclusive distributed by H'art / Bertus. www.hart.de/home-en.html
Record dealers in the USA can get our releases directly from: www.allmediasupply.com and www.aent.com
7
What's This
Advertisement