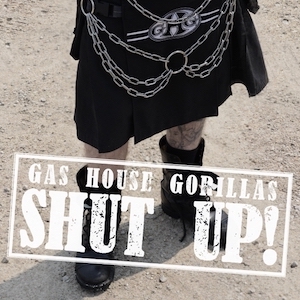 In 2003 Rick Fink started a band with the express purpose of defying category. Early on, the Gas House Gorillas became a virtual who’s who of the Rockabilly, Swing and Blues community, sort of a wise-guy Jump Blues band from Hell. Crusher Carmean, the well-known front man of the band Crescent City Maulers joined early on and found a permanent home. From the beginning, the band built a solid reputation through constant touring and fearless take-no-prisoners performances.
As the years went by, the band continued to hone it’s high-energy Roots Rock approach with a more Punk aesthetic, creating a sound all their own and gaining an ever growing and devoted fan base. Summer 2013 saw the release of Punk Americana on Lanark Records, which became the #1 and #2 most downloaded album in the country, competing against national and international recording artists.
In 2015 the band decided to ditch the horn and become a quartet. The result was an even more muscular musical assault. Rounding out the current lineup are Oscar Rodriguez on guitar and Eddie Everett on drums. The fruits of this configuration can be heard on the band’s upcoming album SHUT UP! on Stoopid Brute Records™. You will find Big Band Swing, Rockabilly Rave Ups, Hard Core Punk and even sweet Pop music standing side by side under one roof. GHG consider this to be their greatest achievement and the best representative of what this band is about. The Gorillas will continue to bring smiles to the masses as they joke, cajole and crowd-surf their way into 2016 with a vengeance.
9
What's This
Advertisement