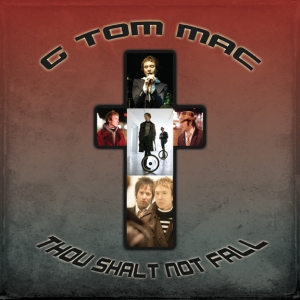 G TOM MAC...songwriter, producer, performer.
If you think you dont know him think again. G TOM MAC, aka Gerard McMann wrote and performed the haunting track Cry Little Sister from the critically acclaimed Joel Schumacher film, The Lost Boys. The remix of Cry Little Sister topped the UK charts and was a #1 CD in Germany. Along with a string of TV credits under his belt, (this years finale of the NBC hit series Scrubs, music for The West Wing, The Shield, Witchblade, Felicity, Crossing Jordan, Charmed, Dawsons Creek, Buffy The Vampire Slayer, Ed, The Immortal and The X Files) G TOM MAC is more than just a songsmithhes a triple threat.

And lets not forget his movie credits. Known as G (a nickname given to him by his friend Roger Daltrey), G TOM MAC wrote and performed a duet with Roger for the comedy-hit film The Banger Sisters starring Golde Hawn and Susan Sarandon. G has also penned music for countless films like Fast Times At Ridgemont High, Terminator 3, All The Right Moves, Chasing Amy, Born To be Wild, Kicking and Screaming, The Lonely Guy, Spring Break, No Way Home, Grandview USA and The Lost Boys. In the upcoming Lions Gate release, I See You.Com starring Beau Bridges and Rosanna Arquette, G TOM MAC wrote, produced and sang the title track.

Born in Birmingham, England, Gerard spent his early years listening to The Beatles and Stevie Wonder. I was inspired by various pop and R & B artists at an early age. His family moved from England to New York City when Gerard was 11 and then a few years later moved to the Midwest. When I was there I started learning guitar and the bass and realizing I had a voice, I started a band, which played in clubs all over the Midwest.

G TOM MAC returned to New York City to pursue his performing career. My first gigs in NY were playing bass and guitar in R & B bands in Harlem. Soon Gerard was writing songs for himself and his career began to take off. Brought to Los Angeles by Warner Brothers Records to showcase him as an artist, G TOM MAC quickly impressed Hollywoods film elite like Joel Schumacher, Jerry Bruckheimer, Cameron Crowe, and David Geffen.

Gerards a triple threat, hes a writer, hes a producer and hes a performerits very difficult to find someone to deliver all that
- Nigel Sinclair, Producer Terminator 3

Cry Little Sister blew us all away. It was more than a song. It was like a religious experience
- Joel Schumacher, Director The Lost Boys

G TOM MACs songs have been recorded by a wide-range of artists such as:


The prolific songwriter has recorded several solo albums, the most recent, G TOM MAC for L.A.s Edge Artists, and BLUE RUE for Arc/Columbia. Hes written and produced WITCHBLADE-THE MUSIC, a compilation of music from the original series on TNT.

Warner Chappell Music has commissioned G TOM MAC to produce and record classic songs from their catalog for The Covers Project, a yearly program designed for use in TV commercials in the U.S., Europe and Asia. The latest 19-song CD was released earlier this year.