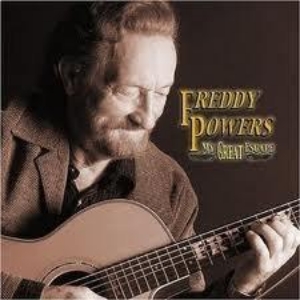 "Freddy Powers is my close friend, probably my closest in the music business. He's my buddy, and we wrote a lot of songs together. He's a great rhythm guitar player and he knows a million songs."
~ MERLE HAGGARD

This album was co-produced by Merle Haggard and Freddy Powers and recorded at Merle Haggard's studio in Redding, California in 2003.

"MY GREAT ESCAPE"
This album was co-produced by Merle Haggard and Freddy Powers and recorded at Merle Haggard's studio in Redding, California in 2003. Merle joins Freddy on this album and sings a couple of duets with him. "Tom Sawyer & Huckleberry Finn" (written by Freddy) is the tale of Powers' and Haggard's "boat-life days" also known as "The Spree of '83." Merle and Freddy co-wrote "Wild Party Blues" another "tribute" to a wild time in their younger years.

FREDDY POWERS - BIOGRAPHY
Freddy Powers was born in Duncan, Oklahoma and raised in Seminole, Texas. He has received numerous BMI and CMA Awards including CMA's Triple Play Award for writing three number one songs in a twelve month period.

Freddy's songs have been recorded by many artists including, George Jones, Ray Charles, Janie Frickie, The Wilburn Brothers and over thirty recorded songs by Merle Haggard including the hits, "Natural High," "Let's Chase Each Other Around The Room Tonight," "I Always Get Lucky With You," "A Friend in California" and "Looking For A Place To Fall Apart."
53
What's This
Advertisement