For the Love of the Music - Original Soundtrack 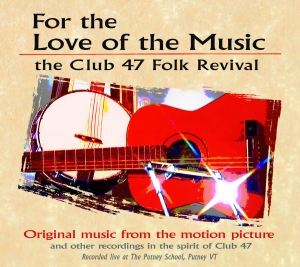 
From the award-winning documentary about a watershed moment in American music history, For the Love of the Music: the Club 47 Folk Revival, comes this unique soundtrack album. With 14 newly recorded tracks, this outstanding collection features performances by Club 47 icons Tom Rush, Peter Rowan, Jackie Washington (a.k.a. Jack Landron) and Jim Rooney, along with some of today's finest singer-songwriters. In the true spirit of Club 47, the album celebrates the continuum of folk music, from old-time traditional, blues and country to the folk music of today.
Highlights include the film's theme song, "Sweet Spot," written by Antje Duvekot and performed by Antje along with Meg Hutchinson and Ellis Paul-- the only recording of this song by this remarkable trio. In a stunning duet, Meg Hutchinson is joined by Antje Duvekot for Meg's classic "True North." Other examples of this tradition of taking something very old and making it new again is an original arrangement of the classic "Red River Valley" by the legendary composer David Amram, performed by Amram, Peter Rowan and James Preston and Tim Eriksen's performance of the classic "Oh Death." Along with these new tracks that are not in the documentary, the soundtrack contains full versions of music only briefly featured in the film itself, such as Peter Rowan's "Walls of Time" and Ellis Paul's "Hurricane Angel."  The album concludes with Hayley Reardon's anthem against bullying, "Stand Together." Now only 17 years of age, Hayley (named one of the Boston Globe's 2012's Bostonians of the Year) is an inspiring example of the future of the folk and singer-songwriter tradition.
The For the Love of the Music: the Club 47 Folk Revival Motion Picture Soundtrack is an opportunity to hear over 50 years of folk in one collection.
3
What's This
Advertisement