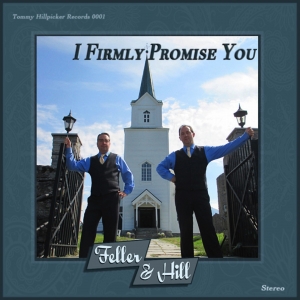 Available March 24 is the brand-new all-Gospel release from Feller and Hill, "I Firmly Promise You", on the Tommy Hillpicker Record label. For DJ's wishing to have a promotional hard copy, simply go email info@fellerandhill.com with your name and address. The new release will be available to purchase at www.fellerandhill.com, Amazon, ITunes and for DJ downloads at Airplay Direct. As always, Feller and Hill include a wide variety of stylings on this album, including traditional Bluegrass-Gospel, Southern-Gospel, Hymns, and some brand-new material.

The first single to be released from "I Firmly Promise You", will be a song, written by Ruby Moody, titled "Walking My Lord Up Calvary's Hill". What makes Feller and Hill's version unique is the vocal collaberation with "The Boys From Indiana". Through some innovative studio work, you'll hear Feller and Hill singing along with Aubrey Holt's and Harley Gabbard's vocals, which were laid down some thirty years earlier, when they recorded their version of the song.
You may just get chills when you hear the resulting harmonies. Tom is the nephew of Aubrey and Harley and Chris grew up as one of the Boys From Indianas' biggest fans. They are both very excited to have this opportunity to appear on a recording together with them.

"I Firmly Promise You" will be the first release on the Tommy Hillpicker Record label. Feller and Hill have opened their new label, using the knowledge, resources, and momentum they gained while working on their first two projects with Blue Circle Records, which has ceased operations after the loss of Miss Dixie Hall. Due to the success of their first two projects, calls are already coming in from other artists interested in working with Tommy Hillpicker Records.

If you like a mix of Traditional Gospel, Southern Gospel, Bluegrass-Gospel, and Country-Gospel, then you'll love the new release from Feller and Hill, "I Firmly Promise You".