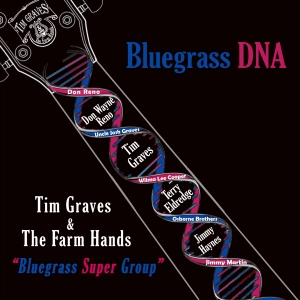 To celebrate release day, the band is excited to reveal the next single from the project. The Roger Ball written recording “When The Vow Breaks” will serve as the second single to radio. The track tells the tale of heartbreak with a unique twist. At the forefront of the song are Graves’ powerful vocals on full display throughout. It’s the follow-up to the lead release “Bluegrass DNA,” which also is the title-track.

It’s safe to say that Bluegrass DNA is something that runs deep within each member of the Farm Hands. The title pays tribute to multiple founding fathers of Bluegrass while showcasing how the tradition lives on through newer generations of pickers. Current member Don Wayne Reno is the son of the legendary Don Reno, while Terry Eldredge previously played with the Osborne Brothers and Jimmy Haynes has decades as an experienced musician. Pair all of that with Grand Ole Opry mainstay Tim Graves, and the result is a collection of music that sees traditional meets contemporary Bluegrass, plus some Gospel tunes along the way.

The Farm Hands are also celebrating FOUR recent SPBGMA nominations. Set to take place in Nashville from January 26-29, the winners will be voted on by attendees at the convention. The group is nominated for “Gospel Group of the Year,” “Bluegrass Band (Overall) Of The Year,” and “Vocal Group of the Year.” Graves is also nominated for “Dobro Performer of the Year” as well. The quartet is no stranger to the awards, having won the coveted “Entertainer of the Year” twice, while Graves is also an inductee into the Bluegrass Music Preservation Hall of Fame.

Get all the latest news stories, find upcoming tour dates and more by checking out the group’s newly revamped website www.farmhandsmusic.com. While there, fans can purchase music, learn more about the band and so much more!