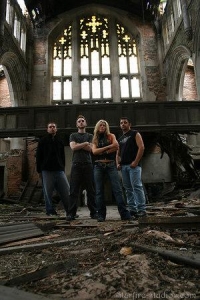 Combining the musical styles of alternative, hard rock, classical, progressive, and heavy metal, F.H.O.D. has become a band with a sound for everyone. From hypnotic drum rhythms in the vein of Tool and Rush to old school metal bass lines reminiscent of Iron Maiden and Sabbath, F.H.O.D. borrows from the old classic rock and combines current trends and modern hooks to create a sound uniquely their own. Together with dynamic guitar roar and powerful, emotionally charged vocals, this Chicago band is receiving great reviews as a live band with a huge sound and endless musical potential.

Their newest 2008 release "My Great Escape" has been noted as “snarling, chest-pumping, knock-you-on-the-ground heavy-metal” (Dustin Shoof, Express-Times), “material and a level of songwriting and production that makes it hard to believe this is not a "signed" band (Shelly Harris, KNAC.com “The Hunt”), and “an album worth throwing into your music library.” (Bernie Gay, freelance music critic). It is available on iTunes, CD Baby, Fandoodle.com, Zoomoozik.com, femmemetalstore.com and many other digital download sites.

It can be described as somewhat of a dark hypnotic journey, that is sometimes treacherous, but filled with hope. There’s an emotional element to each of these songs that the listener will connect with, and make them their own. From the epic song of survival in “Against the Odds,” to more melodic sounding “In My Shell,” to the upbeat tempos of “False Prophet” and “Kings and Queens,” this album clearly does not leave any stone unturned. With story telling, thought provoking, and deeply personal lyrics, the listener will surely connect to the music. There is a warm classic-like sound to this CD that gives the songs character, A modern sound mixed with an old school feel, skilled musicianship, and credible songwriting abilities, My Great Escape will be an album of which people will take notice.

F.H.O.D. was selected as a “featured band to watch” in No Cover Magazine’s March 2007 edition, along with “Unashamed” being selected to appear on No Cover’s Groupies Suck #10 Compilation available at all Barnes and Nobles stores. IN 2007, F.H.O.D. also signed a music licensing agreement with MTV/VH1. F.H.O.D. recently won Rock 105.5 Public Exposure Battle of the Bands to perform at 2007 Summer To Ride Festival in Terre Haute, IN. They also appeared as featured artists in ChicagosRock.com Magazine, Intense Ink Magazine and Rock Scarz magazine and compilation CD. Opened for national bands Cage, Warrant, Sponge, Jackyl and Doro.