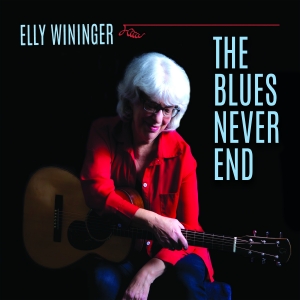 
Elly Wininger — Singer / Songwriter / Guitarist
Inducted into the NY Blues Hall of Fame in 2014, Elly Wininger's third album "Little Red Wagon" was #8 on the Folk Music DJ Chart for January 2018 and in the top 100 for that year. Her most recent album, "The Blues Never End" including the award-winning song "Right Kind of Trouble" was released in September 2021 by Earwig Music. It spent 4 weeks as the #1 Acoustic Blues Album on the Roots Music Report and has remained in the top 6 since.

"Before I could read or write, I was transported by my parents' 78s: Vera Hall's "Black Woman;" Blind Willie Johnson's "Dark Was the Night" and Lead Belly, who I used to try to sing like, much to my kindergarten teacher's dismay. I had no idea what or who I was listening to, but it stirred something in my soul that has been swirling ever since."

Cutting school to hang out in the Village, Elly listened. There was Lightnin' Hopkins, Muddy Waters, Mississippi John Hurt, Dave Van Ronk, and newcomers like her teacher David Bromberg, and John Hammond Jr., Artie Traum, Geoff Muldaur, Danny Kalb and so many others picking up from the source. Eventually she got up the courage to play in the basket houses. 1973 found her on stage at the Philadelphia Folk Festival, singing with Maria Muldaur and immersing herself in all the styles that made up the 'folk revival.'

Having played historic NYC venues such as Folk City, Kenny's Castaways, Dr. Generosity's, and the Bitter End, Elly now tours and performs nationally and is an annual feature at the Woodstock Invitational Luthier's Showcase. Elly's musical talents, however, don't end there. As producer of "Rockin' the Boat," a public radio series which chronicles the power of music in movements for social and political change, Elly won several awards, including one from the United Nations. As a composer, Elly's guitar, vocal work and original songs, have been featured in theater productions, video games, and in the Clio award-winning public service campaign against drunk driving, "Friends." Elly produces her own albums as well as albums for other artists, and she hosts the live/podcast variety show: "Catskill Cabaradio." In addition to giving workshops and clinics, Elly has created a program called "Our Song" which has been used by many organizations including the ARC, to assist people of all ages and abilities in writing their own songs.

Harkening back to her start in Greenwich Village, festival promoter Kurt Henry called Elly a "folk-blues legend." And indeed- she played the very first set on opening night at CBGB, and was offered a recording contract with Red Robin Records at age 16. "I saw an ad in the Village Voice that said 'Wanted: Blues Singers,' so I grabbed my guitar and took the subway to the Bronx. After wandering around the projects, I finally found the right door. I went in and played for a while- I think it was "Rock Me Baby" and "Key to the Highway." The woman auditioning me yelled for her partner to come in the room. 'Listen to this' she said, nodding at me, in my braces and pointy glasses. I was as surprised as they were when she handed me a contract."

"As I tour from my home base in Woodstock NY, I am always inspired by the beauty of the people and places around me. I have come to understand that the power of music comes from sharing, not just performing. The connection among people that can be created with music is what keeps me going."