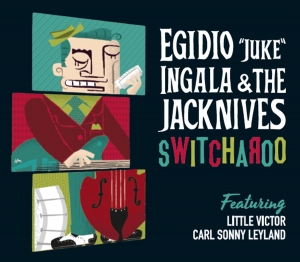 Egidio "Juke" Ingala & The Jacknives – Switcharoo
In every city, town and hamlet in the world, there are a few people who are just a little different. From a little fishing village in southern Brazil to a factory town in the Ukraine there is someone, maybe even three or four like-minded individuals, who speak an esoteric, universal language. From Stockholm to Los Angeles, from Chicago to Milan and Bologna here are people, not many mind you, who communicate in this unwritten dialect. It is the language of the blues. Just for sake of clarification, I’m not talking about “blues-rock” that ugly, coarse, rather juvenile, bastardized way of communicating, but…real blues. In northern Italy, there are four gentlemen who speak this language and have for many years. They are known as Egidio “Juke” Ingala and the Jacknives. The four individuals who make up this band have naturally gravitated to one another. Their love for the blues and mutual commitment to presenting this music to the public the right way is so deeply ensconced in their collective consciousness that any deviation from the truth that lies in the heart of this music would be tantamount to blasphemy.

They are of course Egidio, as well as guitarist Marco Gisfredi, bassist Max Pitardi and the great Enrico “Henry” Soverini on drums. This ensemble has been called the Italian Aces. I don’t think that is really much of a stretch as these guys are cut from that same bolt of cloth. Think about that as you listen to this album. How many guitar players really understand how to play behind a harmonica for instance like Louis Meyers or Marco? How many drummers understand the various blues shuffles that Fred Below incorporated into the music of Junior Wells and Muddy Waters for instance? Enrico does and he brings that to the bandstand and the recording studio every time.

Then we have the album’s producer, Little Victor – who also guests on a few numbers. He is a vagabond, globetrotting raconteur roaming the countryside in search of that “sound.” An accomplished and highly acclaimed traditional blues musician his own right, he is always putting his skills to work getting like-minded individuals into the recording studio.He even found the great Carl "Sonny" Leyland, who is a British ex-pat living in the middle of nowhere in the California hinterland at an undisclosed location. Victor and Carl’s resumes and recording credits are as long as my arm. Suffice it to say their inclusion here is just perfect.

As the late, great Lynwood Slim used to say, "Blues music is the universal language." Thanks to Egidio "Juke" Ingala & the Jacknives I get to hear it spoken articulately.
– David Mac BLUES JUNCTION Productions.com

Egidio "Juke" Ingala & The Jacknives
This band has been one of the most in demand old-school rockin' blues combo on the international blues scene for many long years. They played and they still play at the best clubs and festivals and and festivals in the Old Continent on regular bases. Egidio "Juke" Ingala & The Jacknives are famous for delivering highly energetic live performances and also the high quality of the music they perform. They are a top notch band that plays Chicago and West Coast Blues thrilling audiences with their explosive performances in many different Countries. Their fantastic new album on Rhythm Bomb Records features multiple Award-winner Little Victor who's coming back strong with another outstanding production.
Frontman Egidio "Juke" Ingala has a very distinctive style on harp and vocals. His harmonica sound has been described as something in between Little Walter and George Harmonica Smith, with a touch of Walter Horton. Juke is a natural-born entertainer with a strong sense of showmanship -something that too often lacks in contemporary blues performers. A subtle combination of tone, phrasing and attack combined with a strong sense of swing are his trademark. A veteran performer with a few albums under his belt, he has beenon the scene since the early 90's, he has been working/touring with American "heavy weights" such as Alex Schultz, Linwood Slim, Anthony Paule, Johnny Nitro, Gary Primich and many more.
Jukd started to work with the Jacknives in 2010 and it was just like they have been playing together since day one. The Jacknives are one of the most solid and authentic blues combos to be found anywhere. The band was already famous for backing harmonica players in a way that reminded of legendary Chicago blues trio the Aces.. band leade Marco "The Kid" Gisfredi is one of the finest real-deal blues guitar player on the scene today. Inspired by Eddie Taylor, T-Bone Walker, Louis Myers and many other greats, he cut his teeth playing behind players such as Paul Oscher, Steve Guyger, Mark Hummel, Lynwood Slim Mark Tortorici, Mike Sanchez and many more.
The band's rhythm section is currently formed by rock-solid bass player Max Pitardi and drummer extraordinaire Enrico "Henry" Soverini -whose love and knowledge of the fine points of this music allows them to play everything from dirty down-home blues to more sophisticated urban grooves. Max -one of the founding members of blues/roots-rock outfit "the Dirty Hands"- first started to play with Juke in 1993. Henry Soverini cites Fred Below, Odie Payne and SP Leary amongst his main influences, has played all over Europe in blues and American music bands, also offering his highly-praised solid backbeat to many touring American musicians
7
What's This
Advertisement