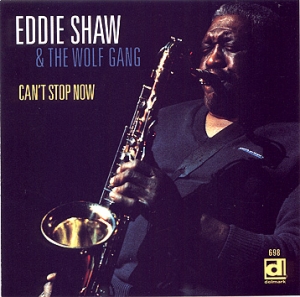 Since he left the Mississippi Delta in the 1950s, Shaw has been a sideman, band-leader, arranger, and a club owner. Shaw has played with some of the great Chicago blues legends: Howlin’ Wolf, Muddy Waters, Otis Rush, Willie Dixon, Earl Hooker, and Hound Dog Taylor. In the 1960s, Shaw did extensive session work with Howlin’ Wolf, and after Wold passed away in 1976, Shaw took charge of the band and began his solo career. Can’t Stop Now is his first Delmark release and his seventh solo release. So sit back and enjoy great Chicago blues by a living blues legend!

all songs written by Eddie Shaw unless noted

When it comes to blues, Chicago's strictly a guitar and harmonica town. Saxophonists who make a living leading a blues band in the Windy City are scarce as hen's teeth. But Eddie Shaw did precisely that after his longtime boss, Howlin' Wolf, died in 1976. The powerfully constructed tenor saxist rubbed elbows with an amazing array of luminaries over his 60-plus years in the business. By the time he was 14, Shaw was jamming with Ike Turner's combo around Greenville, Mississippi. At a gig in Itta Bena where Shaw sat in, Muddy Waters extended the young saxman an invitation he couldn't refuse: a steady job with Waters' unparalleled band in Chicago. After a few years, Shaw switched his on-stage allegiance to Waters' chief rival, the ferocious Howlin' Wolf, staying with him until the very end and eventually graduating to a featured role as Wolf's bandleader. Shaw also shared a West Side bandstand or two along the way with Freddie King, Otis Rush, and Magic Sam. The saxist did a 1966 session with Sam that produced his first single, the down-in-the-alley instrumental "Blues for the West Side" (available on Delmark's Sweet Home Chicago anthology). Shaw also blew his heart out on Sam's 1968 Delmark encore LP, Black Magic.

Eddie Shaw's own solo recording career finally took off during the late '70s, with a standout appearance on Alligator's Living Chicago Blues, Vol. 1 anthology in 1978, followed by his own LPs for Simmons, Rooster Blues (In the Land of the Crossroads), and the Austrian Wolf imprint, for whom he recorded from the '90s into the 21st century with albums such as Home Alone (1995), The Blues Is Nothing But Good News! (1996), Too Many Highways (1999), and Give Me Time (2005). (Shaw's lead guitar-playing son Eddie, Jr. -- aka Vaan Shaw -- became a member of his father's band and also recorded for the Wolf label; his other son, Stan Shaw, is a noted film and TV actor.) In 2012, Stringtown Records released Still Riding High by Eddie Shaw & the 757 Allstars. Shaw won Blues Music Awards in 2013 and 2014, and Chicago mayor Rahm Emanuel proclaimed May 3 as Eddie Shaw Day in the city. After his long and illustrious blues career, Eddie Shaw died in Chicago in January 2018 at the age of 80.

Biography
Eddie Shaw has done just about everything in the blues business. He’s been a sideman, singer, bandleader, songwriter, arranger, producer and tavern owner. In most of those roles, he has worked on behalf of other artists. The whole West Side blues scene benefited from Eddie’s efforts, which included acting as bandleader and manager for the late Howlin’ Wolf from 1972 to 1975. After working for years behind the scenes, Eddie stepped out on his own as a band leader, proving himself to be one of the blues world’s premier horn players and a fine vocalist to boot. Before Wolf died in 1976, he urged Eddie to carry on the blues with The Wolf Gang. Eddie not only kept the core of the band together (later adding his talented son Vaan on guitar), but also forged a new identity for Eddie Shaw and The Wolf Gang.

Eddie’s career with Wolf began in 1958, but his varied activities brought him in contact with hundreds of other bluesmen, both in Chicago and in the South. Eddie was born March 20, 1937, in Benoit, Mississippi, and grew up in nearby Greenville, where his adolescent friends included a number of musicians who would one day become fellow Chicago bluesmen: Little Milton Campbell, Left Hand Frank Craig, Johnny “Big Moose” Walker and L.V. Banks, among others. Eddie and his close companion Oliver Sain were just two of the many blues and jazz horn players to come from Coleman High School. They joined other formally trained musicians in Greenville’s sophisticated, urban jump-blues bands, which featured four- and five-man horn sections. Eddie and Oliver made the rounds of the local nightclubs, schools, and dances, and often traveled through the Delta to play with bands such as Ike Turner’s and Guitar Slim’s. Eddie, who played trombone and clarinet before switching to saxophone, also put in some time with more traditional local bluesmen like Sain’s stepfather, Willie Love and guitarist Charles Booker. In 1957, Eddie sat in with the Muddy Waters band in Itta Bena, Mississippi. Muddy hired him on the spot, and Eddie arrived in Chicago as a member of the top band in town.

The Chicago bands of Muddy and Wolf were built around amplified country blues, and Eddie found that he had to play differently in Chicago than he had in Mississippi. He was usually the only horn player in the band and no longer had section arrangements or short, set parts to play. But Eddie adapted to the new demands as a soloist. A few months with Muddy, a few months with Wolf, back to Greenville for a short stay, and then Eddie settled in Chicago for good. He rejoined Wolf for about two years, moved on to the Otis Rush band, and during the ‘60s worked most often with Magic Sam on the West Side. In between, there were plenty of weekend gigs with any band that needed a sax man for a night or two--“in and out of bands, up and down the highway,” says Eddie.

Eddie sang and fronted his own band from time to time, using guitar players such as Magic Sam, Luther “Guitar Jr.” Johnson and Jesse Robinson. He played on recording sessions with Wolf, Sam, Freddie King, Jimmy Dawkins and others, and occasionally took his band into the studio to record dubs for promotional use on jukeboxes and on Big Bill Hill’s local radio and TV programs. One such recording, an instrumental called “Blues For The West Side,” became a minor Chicago hit when it was issued as a single by Colt Records. In addition, Eddie wrote songs for Wolf, Willie Dixon, Magic Sam, and Andrew “Blueblood” McMahon, and contributed arrangements to sessions by Wolf, Muddy and others. In the midst of all this, Eddie was usually involved in some sort of independent business venture. An air conditioning and refrigeration service, a laundromat, a barbecue joint, a tavern on West Madison Street, which was famed for its all-star Monday jam sessions. For a number of years, Eddie operated the biggest blues club on the West Side, Eddie’s Place (The New 1815 Club), which featured such top-notch blues acts as Wolf, Otis Rush, Jimmy Reed, Luther Allison, James Cotton, Mighty Joe Young and Little Johnny Taylor.

Besides constantly touring for over two decades, Eddie has continued to record prolifically. His debut album, Have Blues, Will Travel, was released in 1977 on the Simmons label and later reissued by Rooster Blues. He cut four sides in 1978 for Alligator’s Living Chicago Blues series with the famed Hubert Sumlin on guitar. Since then, he’s cut a second album for Rooster Blues, one for the French Isabel label (issued in the USA by Evidence), four for the Austrian Wolf label and one for Chicago’s own Delmark Records.

Eddie Shaw has been bringing his fat-toned, blues-drenched saxophone to blues fans for fifty years, thirty of them as a band leader and vocalist. He’s won fans all over the world, and continues to perform constantly, carrying on in the Windy City spirit of his mentor Howlin’ Wolf and his friend Magic Sam, but above all as his own man, Chicago’s #1 blues horn player.