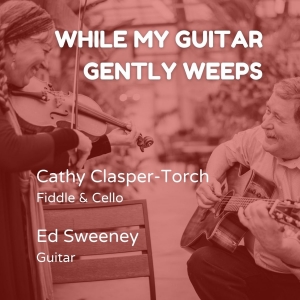 Cathy Clasper-Torch is a multi-instrumentalist and singer. Cathy is one of the best known musicians in Southern New England. She is adept with various musical styles including classical, jazz and folk. Cathy is in constant demand to perform onstage with various ensembles playing fiddle/violin, cello, piano and ehru. Cathy combines her love of all genres of music in her playing and improvising.

Cathy Clasper-Torch has appeared on over a dozen recordings as a guest artist. Cathy’s has several solo recordings that have been well reviewed throughout Southern New England.

In addition to performing, Cathy maintains a full teaching schedule as part of the Blackstone River Theatre’s Heritage Arts Studio.

Ed Sweeney has performed nationally and internationally for almost 40 years. Ed has performed in schools, clubs, tea houses, festivals, house concerts, theatres —, almost any venue imaginable. Ed’s concerts and recordings have earned accolades throughout the United States, Canada, parts of Europe and parts of Asia. Reviewers call him “a master of unpretentiousness” and “delightfully fresh.”
Ed’s music has been featured on NPR and is currently heard on hundreds of radio stations and on-line networks. Ed’s music in Ken Burns documentary Not for Ourselves Alone: The Story of Elizabeth Cady Stanton & Susan B. Anthony. Ed's music has been used for television soundtracks as well as background music in Disneyland Paris and Disneyland Tokyo.
Ed Sweeney through his musical expertise, breadth of knowledge, and wonderful sense of humor, helps listeners come to understand the motivations, stories, and culture that have made us who and what we are today.