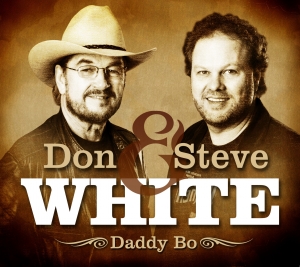 Don White and Steve White are a father-son team that have enjoyed success in their respective solo careers, and have worked together from time to time over the years. Now they have joined forces to create their exciting new masterpiece, DADDY BO . This album features the duo's unique talents as songwriters, vocalists, musicians, and producers. The new album, recorded at David Teegarden's Natura Digital Studios, brings together some of the finest musicians on the scene today to create a truly memorable experience.

Don and Steve's first actual gig together was in Steve's third grade talent show in Tulsa. Don had taught Steve to play the guitar and the duo tore the house down! Don's career path led him to live in Nashville during the 1970s, but he returned to Tulsa for a few years, and Steve started playing with his dad's band in the mid 1980s. The music business once again beckoned Don to Nashville, but in the mid 1990s, Don returned to Tulsa and the father and son joined forces in the band Okie Soul, which also featured international singing star Gus Hardin. They first got together in the studio to work on Don's 1999 release Okie Fiesta," sharing all of the guitar and vocal work. Together, Don and Steve have shared the stage in concert with many greats, including: Dwight Yoakam, Delbert McClinton, Buddy Guy, Asleep At The Wheel, Merle Haggard, Pam Tillis, Ray Charles, and others. Now the duo has joined together to record the all-original studio album, DADDY BO.

At a time when other artists strive solely for commercial acceptance, Don White remains obsessed with creative excellence. His belief in the importance of musical integrity, along with the quality of his own work, has served as the foundation for his artistic reputation among serious musicians and songwriters, along with promoters of live venues. He plays and sings his own style of country blues, developed though years of writing, recording and performing. The "new traditionalist" sings new songs in old-fashioned ways and represents the most commercially successful trend to ever hit country and blues music. White is not a new traditionalist, he is a traditional traditionalist, and his tradition is excellence.

If you want to know who is truly talented in the music business, don't ask the publicists, booking agents, managers, or others in the front offices. Ask those on the front lines - the singers, songwriters and players. They gauge an artist by the way he touches their heart with no regard to whomever tops the charts. Their opinions are based on feelings, not figures. White is a household name among the knowledgeable. J.J. Cale, who helped White start his first band and played guitar in that band. Cale fostered an increased interest in country music because of White. So did other artists who are an integral part of "The Tulsa Sound” - an American art form known nationally to serious listeners. Rockin' Jimmy Byfield, Gus Hardin, Ronnie Dunn (of Brooks and Dunn), The Tractors, and Debbie Campbell all performed the Tulsa Sound before they performed nationally, and they all listened extensively to Don White.

White is a songwriter's songwriter. Rosanne Cash, The Oak Ridge Boys, Suzy Bogguss, Razzy Bailey, and Davis Daniel are some of the artists who have recorded White's songs. White is a regularly requested studio musician, who has worked with Waylon Jennings, J.J. Cale, Marty Stuart, The Tractors, Jamie Hartford, Katie Moffit, and Johnny Rodriguez. He has performed as a solo act and with his own band in concert with Waylon Jennings, J.J. Cale, Dwight Yoakam, Suzy Boggus, Willie Nelson, Don Williams, Ray Price, George Strait, Gus Hardin, Delbert McClinton, Toby Keith, David Allen Coe, Merle Haggard, Ry Cooder, Poco, and others. He has also been a valued sideman, lending his guitar, vocal, and band leader prowess to artists such as: Buddy Knox, Roy Clark, Freddy Fender, Johnny Rodriguez, Gus Hardin, Larry Mahan, J.J. Cale and others. One music critic put it this way. "Don White is one of the originators and perpetuators of the Tulsa Sound. Don White's sound is a smooth blend of rhythm and blues, country blues, honky tonk shuffle, and rock and roll with a kind of hard-bitten optimism. So listen to Don White and discover what those in the know have known. Find America's best kept creative secret and let your senses burn. They will - from the flame of his artistic excellence."

Raised around legendary songwriters, singers, and musicians such as J.J. Cale, Leon Russel, Gus Hardin, Teegarden and Van Winkle, The Gap Band, Don White, Bill Davis, Jimmy Markham, The Tractors, and Bobby Keys (of the Rolling Stones), Steve White is taking his place among these greats in all three categories. Born in Tulsa, Oklahoma, and exposed to R&B and the Tulsa Sound at an early age, Steve White's music is seeped in the same soulful tradition that has sparked many a musician's career. Since writing his first song at the age of nine, White has fine-tuned his craft as a songwriter, guitarist, singer, and polished performer. White started performing in his legendary father Don White's band in the mid 1980s, and cut his teeth in several bands in the Tulsa area early on. Then, for three years, White performed as lead guitarist and vocalist in the Gus Hardin Band, receiving many an ovation for their soulful vocal duets. He then fronted the band Otis, a rhythm and blues outfit full of veteran musicians.

In 1999 he formed the band Steve White and Supergroove, exploring a funky, groove based, and strong vocal sound that has become his forte' and has drawn comparisons to Sly And The Family Stone, The Meters, The Stax Records sound, Little Feat, Brand New Heavies, Tower of Power, and others, yet enjoyed a distinct originality all their own. He then fronted The Steve White Band continuing his brand of Funk, R&B, and Blues. Currently living in Dallas, Texas, White works with the Tulsa-based band Chunky Monkey with Steve Elmore, and Damon Daniel, and the DFW based Rachel Stacy Band. White has also shared the stage as a band member or a guest musician with artists such as The Messengers, The Bill Davis Band, Flash Terry and the Uptown Blues Band, Scott Ellison, Steve Pryor, Jimmy "Jr." Markham, The Brad Absher Band, Blind Mississippi Morris, The Oscillators, Polly Ess, Full Circle, Maxx Campbell, the Full Flava Kings, Earl Cate (the Cate Brothers Band), Bugs Henderson, The Real Band, and many others. He has also played shows with his band and others, sharing the stage with the likes of Leon Russell, Delbert McClinton, Buddy Guy, and Boys II Men, as well as being a regular at many festivals and venues. White's inspired guitar playing is smooth, yet intense, relying heavily on the groove.

As a singer, Steve White is about as good as it gets. Whether it's a rockin' up tempo dance tune, a smooth medium groove, or a slow ballad, Steve is an expert at connecting with the audience on a fundamental, emotional, and spiritual level. It has been said of White, describing his cool vocal stylings and smooth, groove based guitar work, that the only thing "white" about Steve is his last name.

White has now teamed up with his father Don White to create an incredible all original CD entitled DADDY BO. White says, "It is a distinct honor and privilege to collaborate with my dad on this project. It was great fun to work with him, David Teegarden, and all of the fantastic musicians on this album. I'm very proud of our work together, and look forward to much more in the future." Steve was also able to showcase his talents as a producer, as he co-produced the new album with Don White and David Teegarden.