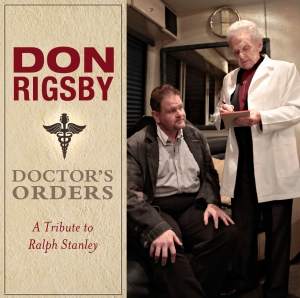 A clever song written by Rigsby and Larry Cordle ("The Mountain Doctor") kicks off this fine recording that features 14 other songs that are associated with Dr. Ralph. Helping him beautifully with excellent accompaniment are James Alan Shelton (guitar), Ron Stewart (fiddle), Steve Sparkman (banjo) and Barry Bales (acoustic bass). This is a first class recording in every way and a fine tribute to his hero, Dr. Ralph.

Don Rigsby grew up listening to early Ralph Stanley records and to the high lonesome sounds of his cousin Ricky Skaggs and the late Keith Whitley, another Elliott County native. His roots in music began as early as he can remember, singing with his family before he started playing guitar at age 12, later adding the mandolin, fiddle, and dulcimer. For his sixth birthday, Don was taken to the Paramount Arts Center in nearby Ashland, KY, to hear his hero Ralph Stanley perform “Little Maggie” and got an unforgettable bonus when Keith Whitley came out to the audience, hoisted young Don onto his shoulders, and carried him backstage to meet Ralph for the first time.

Don worked his way through Morehead State University playing music with Charlie Sizemore, emerged onto the national scene as a member of The Bluegrass Cardinals, then solidified his reputation playing with JD Crowe and The New South and the award-winning Lonesome River Band. Among his long list of accolades are two Grammy nominations, two SPBGMA Traditional Male Vocalist of the Year awards, and two IBMA Awards shared with his fellow Longview performers. Rigsby also contributed vocals to a Grammy-winning album by rocker John Fogerty.