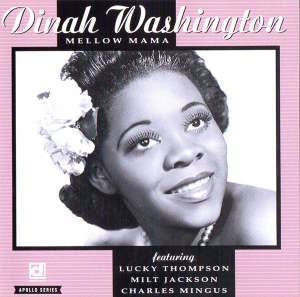 When Dinah Washington left Lionel Hampton’s Orchestra in 1945, she recorded 3 sessions yielding 12 songs for Apollo records. Dinah teamed up with Lucky Thompson who had just arrived in Los Angeles after a stint with the Basie band. Gene Porter, Charles Mingus and Lucky were playing in Happy Johnson’s band in Long Beach. Milt Jackson was passing through with Diz; Bird’s quintet. Lucky organized the sessions and the music is pure delight. Complete liner notes by Dempsey Travis, best selling author of The Autobiography of Black Jazz.

Born in a record store near the Apollo Theatre building in 1944, Apollo Records presented virtually every kind of popular and ethnic music. By 1962, it had ceased recording but continued merchandising its gospel music, primarily the Mahalia Jackson catalog. Delmark has acquired the rights and surviving source material of the long out of print blues and jazz masters, and is presenting them in this Apollo Series, including numerous unissued performances and alternate takes.

Discovered while working as a washroom attendant in downtown Chicago Dinah Washington went on to become one of the most popular and best selling female artists in the 1950s. She got her first break with the Lionel Hampton Orchestra in 1942 at the age of 18 and by the next year had made her first recordings for the Keynote label. After Keynote issued two 78s Dinah recorded 12 songs for the Apollo label in December of 1945. Dinah teamed up with Lucky Thompson who had just arrived in Los Angeles after a stint with the Basie band. Lucky and Charles Mingus were playing in Happy Johnson’s band in Long Beach, CA. Milt Jackson was passing through with Diz and Bird’s quintet. Lucky organized the sessions and the music is pure delight. Best known as a jazz vocalist Dinah performed and recorded in many styles including blues, R&B, gospel and pop music. She gave herself the title “Queen of The Blues” and was inducted into the Rock and Roll Hall of Fame in 1993. Tragically she passed in 1963 at the age of 39.Dinah left Hampton’s band to go solo in 1945. Apollo released five 78 rpm records in 1946 solidifying Dinah’s solo career. When she returned to Chicago in ’47 she opened at the Ritz Lounge, located in the basement of the Ritz Hotel on Chicago’s south side for a salary of $ 250 a week. Within two weeks she was performing in front of packed crowds and on the weekends she had them lined up in the street. After a road trip Dinah returned but her salary was now $ 750 a week. Then in 1950 Dinah signed to the Mercury label and the rest is history. Dinah won a Grammy in 1959 for Best Rhythm & Blues Performance for the song “What A Diff’rence A Day Makes” which reached #4 on the US pop chart. That song, along with “Unforgettable” and “Teach Me Tonight”, has been inducted into the Grammy Hall Of Fame. The Rock And Roll Hall Of Fame listed Dinah’s 1953 song “TV Is The Thing (This Year)” as one of the songs that shaped rock and roll.


From reviews of Mellow Mama:


“Like most blues songs, the ones Dinah sings on this CD wander through the direct world of love, infidelity, heartbreak, sex and economics – all coated with the innuendoes necessary in those days to conform with society’s strictures. There’s the “snake,” the “jellyroll,” gold, all the things in life that, with misuse, can lead to the blues. A washroom girl when she was discovered in 1942, Washington was a salty girl who often would embarrass the men around her with a razor tongue. She sings with the voice of a young girl who has had to grow up rapidly under the hands of rough men. A voice edged with guilt, guilt that victims feel. A voice that can sugarcoat whenever necessary. A voice that teases. A voice that pleads. A voice that loves. A voice that hurts...” – Bill Jamigan, The Alabama Beat


“...this Los Angeles recording revels in a warm and sometimes raucous hard blues swing, this small band understanding Washington’s devel-oping personality perfectly, her sleaze-tinged renderings of these frequently double-entendre-laced tunes playfully toying with unadorned sex, the occasional crotch-thrust sneaking in. What these recordings really prove is that all of the big name jazz vocalists (Vaughan, Fitzgerald, McRae, or Lincoln), none of them had such a firm grasp of how to sing the blues as Dinah Washington and this swarthy swagger of innuendo is a rather fine way to discover it. – Peter Margasak, Butt Rag