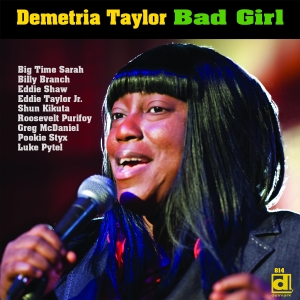 AllMusic Review by Alex Henderson [-]
When children of well-known musicians pursue musical careers, they don't necessarily follow in their parent's footsteps stylistically. The sons and daughters of jazz musicians might end up playing rock, R&B, or reggae instead of jazz; the sons and daughters of regional Mexican artists might end up recording rock en español instead of norteño, mariachi, or banda. But on Bad Girl, Chicago-based blues singer Demetria Taylor definitely follows in her dad's footsteps stylistically. Taylor is the daughter of the late guitarist Eddie Taylor, Sr., who is remembered for his work with Jimmy Reed. Taylor, Sr. was the epitome of electric Chicago blues, and his daughter isn't any less Chicago-sounding on this 2011 release. Vocally, she favors a tough, gritty, edgy approach along the lines of Koko Taylor (another Chicago blues icon), and her approach is unmistakably Chicago-minded on the Willie Dixon staples "Wang Dang Doodle" (which is closely identified with Koko Taylor and Howlin' Wolf) and "Little Red Rooster" as well as on Luther Dixon's "Big Boss Man" (a major hit for Reed). But not everything on Bad Girl has been recorded so many times that it falls into the warhorse category. Demetria Taylor also turns her attention to strong material that ranges from Koko Taylor's "Voodoo Woman" to Luther Allison's "Cherry Red Wine." So no, Bad Girl isn't one of those Chicago blues albums that adheres to an all-warhorses-all-the-time policy. It should also be noted that unlike a lot of electric blues recordings from Chicago, Bad Girl doesn't make a lot of detours into soul. Demetria Taylor pretty much sticks to electric Chicago blues of the Chess Records variety, and while this 66-minute CD is derivative, it is enjoyably derivative. There are no dull moments on the engaging Bad Girl.
16
What's This
Advertisement