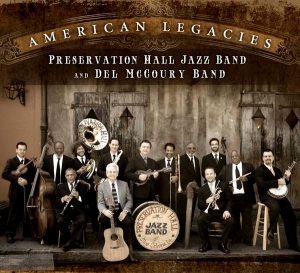 American music fans have an unprecedented opportunity to hear two masterful groups explore the common ground where bluegrass and jazz meet when the Del McCoury Band and the Preservation Hall Jazz Band release their collaborative American Legacies project on April 12th via McCoury Music and Preservation Hall Recordings. Inspired by the success of the Del McCoury’s participation on 2010’s PRESERVATION, a PHJB project made with multiple artists to benefit New Orleans’ unique Preservation Hall venue and its Music Outreach Program, the set offers a dozen songs filled with deep respect and joyful virtuosity. Complementing the release, the two groups have announced a joint tour that will feature them performing on their own and together in a groundbreaking concert experience.

With common roots in the rich musical gumbo of the American south in the 19th and early 20th centuries, bluegrass and jazz have sat alongside one another with a myriad of common influences and musical vocabularies that have nevertheless remained largely unexplored until now. American Legacies is a no-holds-barred tour of songs and sounds that sum up the simultaneous (and often intersecting) histories of two distinctively American musical forms—the jazz that has drawn music lovers from around the world to New Orleans for more than a century, and the “hillbilly jazz” of bluegrass, created more than 60 years ago by Del McCoury’s one-time employer, Bill Monroe and His Blue Grass Boys.

Known as one of the premiere ambassadors of bluegrass, the Del McCoury Band is fronted by veteran Del McCoury, A hero to east coast bluegrass audiences through the 1970s and 1980s, he stepped onto the national stage with a move to Nashville in the early 1990s that started the Del McCoury Band on an unprecedented streak of International Bluegrass Music Association awards and international acclaim. Today, McCoury, along with a band that includes his sons Ron and Rob, are admired by hard-core bluegrass traditionalists and eclectic music fans and stars alike as they make appearances everywhere from the Bonnaroo Music Festival to late night network TV shows to their own popular Delfest. For millions of fans across the US and around the world, the Del McCoury Band is simply the face of bluegrass.

Founded just a few years before McCoury joined Bill Monroe’s Blue Grass Boys, the Preservation Hall Jazz Band has been carrying the distinctive sound of New Orleans jazz around the world on behalf of Preservation Hall, a unique venue that embodies the city’s musical legacy. With a cast of musicians schooled through first-hand experience and apprenticeship into the music’s historic traditions, the PHJB has served as an irreplaceable, vital link to the earliest days of one of America’s most beloved forms of popular music, evoking the spirits of times past in an ever-evolving modern context that has found them traveling around the world.
113
What's This
Advertisement